I set out at high noon on Sunday, riding into the sun bleached sky, hazy with neon light and tickled by little green Eskimos.  I rode East, into the rising sun.  My destination: Coney Island.  I easily zoomed past the other bikers, chucking at their feeble attempts to pedal.  It was like a Hell’s Angel against toddlers on tricycles.

I made it to Coney Island in 90 minutes.  I saw a man with the largest potbelly I have ever seen in my life.  I wanted a frozen lemonade.  I had this idea in my brain that Nathan’s sells these concoctions.  When I say a frozen lemonade, I mean these icy drinks, basically lemonade slushies.  Nathan’s doesn’t sell these.  Why did I think they did? 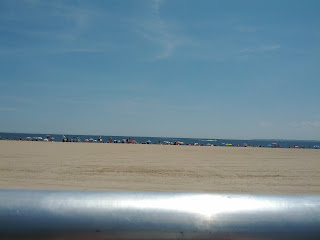 I headed back, knowing that I wanted to stop at Super Taste for noodles.  I also ended up stopping at Eton Too, an Hawaiian Ice parlor in Brooklyn.  Passion fruit and lemon were the flavors I had, and after a hard ride it was amazingly refreshing.  Energized, I was ready for the final push into Manhattan for Super Taste.

Super Taste. Had been wanting to sample for a while, but a recent "best of" list by Danny Bowien of Mission Chinese (see my recent discussion) compelled me to take action.  When I walked in, a lady welcomed (ordered me) to sit down.  My general opinion when it comes to hand-pulled noodles is to get the dry versions, which are stir fried, as opposed to the soup-based version.  The menu listed some dishes as "soup," and others were listed simply as "noodle with beef ball," for example (ask me not what "beef ball" is).  I settled on "hand-pulled noodle with Chinese style bacon and pickle cabbage."  I assumed this would be a dry, stir fried dish.

I placed my order and had it re-iterated (screamed back to me) by the waitress.  I waited for my food.  Everyone in the establishment seemed of Chinese origin.  I read the paper menu, which gave a nice explication of hand-pulled noodles.  It guarantees a "genuine" beef noodle experience. My noodles arrived.  Let the experience begin. 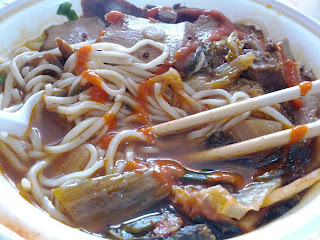 The first thing I noticed was that my dish was indeed a soup, not a stir fry.  Fooled again!  Yet I placed some chili oil and Siracha into the cauldron and began eating and was delighted by what I found.  A rich, flavorful broth with a nice contrasting sourness from the pickled cabbage.  The Chinese bacon, which I assumed would be pork belly, seemed much more like beef.  If it was pork, it was rather dried out yet still offered a nice bit of meaty flavor.  This was an enjoyable noodle soup.

I later asked the waitress if they have stir fried noodles, and she said you have to specifically ask them to prepare it that way. Further investigations are warranted.