On a recent trip to the Middle East, I found myself trapped in the dessert, dying of thirst, and a lone voice cried out, saying "if you make it out of here alive, go to Mission Chinese."  I shall not describe the lengths I went to to ensure my survival.  Let's just say there are quite a few less camels walking this Earth and leave it at that.

Mission Chinese.  It was begotten in San Francisco, sharing space with another, "Chinese-American" establishment. Same physical place, same tables, same delivery guys, different menus, different cooks.  For more background on the rather fascinating history of Mission, check out this Chow article or a review by the San Francisco Weekly. Indeed, both of these pieces describe the background well enough to make any efforts of mine superfluous, repetitive, and altogether meaningless.

Yet I suppose I enjoy meaningless endeavors, for I feel compelled to highlight a few points.  The head cook, Daniel Bowien, who is Korean by birth but was raised in Oklahoma by white people, never had really good, regional Chinese cooking until he moved to San Francisco as a young adult.  He wasn't trained as a Chinese cook, and in fact dropped out of culinary school and then worked for a diverse array of restaurants, some of them of high pedigree.  From what I can gather, this talented young fellow simply wanted to recreate a lot of the regional Chinese food he was eating, altering ingredients as he saw fit.

As I am also a fellow who grew up eating chicken with broccoli and Genera Tso's chicken, I can attest to the surprise and intense feelings of pleasure and obsession that can arise when you eat "real" Chinese food for the first time.  I admit, some might laugh at me and claim I've never eaten real Chinese food as I have never been to China.  But let's avoid this interesting and complicated issue for the moment and assume it's "real" if it's made by Chinese cooks, for Chinese audiences, using the ingredients and techniques used back in the Motherland.

I will say, based on my one visit, and on sampling just two "large dishes" and one "small dish," Mission Chinese is awesome.  The place itself is wildly cool but not pretentious.  The people who work there are nice and down-to-earth.  It's not super loud.  It's comfortable and relaxed.  The food I ate was fantastic. 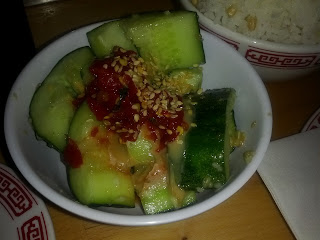 Smashed cucumbers in garlic sauce, at first bite, were disappointing.  They seemed not much more than cucumbers with some chili paste on top.  However, after a few more bites, I could tell these were no ordinary cucumbers.  There was a pleasing saltiness and garlic flavor that had been hidden and crept up on you.  A simple appetizer, yes, but refreshing and very good. 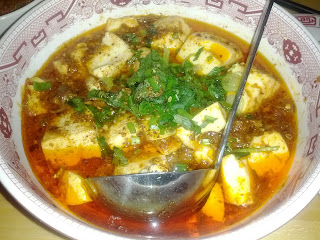 Mapo tofu is a dish I've had many times in many Sichuan restaurants.  The version at Mission was likely the best I've had.  The liquid in which the meat and tofu was immersed was richer and thicker, and the consistency of the tofu was perfect.  Bowien uses pork shoulder (traditionally ground beef is used, though ground pork is sometimes substituted), which is tender and adds a succulent, meaty chew to the dish.  Truly excellent.

Last I was able to sample catfish a la Sichuan, which was served in a bowl with a sour broth and, if memory serves, cabbage.  My friend ate the dish as if it were a soup, which seemed a good enough way to handle the dish.  Perhaps it was meant to be eaten with rice?  Am not sure, but either way it was deeply flavored with a nice hint of numbing Sichuan peppercorn.

Return trips will be necessary.  There is much I want to say, but my head is spinning with flavors and emotions, textures and ideas.  One can sense the cultural diffusion taking place, the skillful and respectful appropriation of an amazing cuisine.  This is one small step for a man, one giant leap for mankind.  And the voice which called to me in the desert must have been the voice of a prophet, for the lord has surely blessed us all with the advent of Mission Chinese.