Tokyo Nights, or The End of Naples Pizza

When I was training to be a samurai, my master, Omi Wanatanabe, once pulled me aside and slapped me with the butt of his sword.

"You, like many," he said, "are transfixed with the idea of Naples pizza."

"But Master," I replied, "it's the most pure, the most true pizza."

"Just because pizza may have been borne in Italy does not mean that style is the most true. You must rage against these falsehoods."

Shaking, I replied: "But I cannot!  No one will understand!"

"To be great is to be misunderstood."

Master Wanatanabe left me in the rain, where I stood for hours, mesmerized by his powerful vision. Watanabe was later killed by a band of ninja goats, yet his words to me have survived.

Lately, I have been feeling rather bored with Naples pizza.  Yes, there are stellar examples.  Anthony Mangieri, who used to run Una Pizza Napoletana out of New York but has since moved to San Francisco, is a maker of truly wondrous Naples-style pizza.  Currently, Motorino in New York does an excellent job, as well.  There may be other places out there in the U.S. or abroad (in Italy, perhaps?) that are wonderful, yet I must say that overall I am bored with Naples pizza, particularly the Margherita.

Give me, instead, the bar pies, tavern pies, tomato pies.  I generally prefer an aged mozzarella these days, which is saltier and tangier.  Gone are the days when I was obsessed with the most pure pizza (or so I once thought).

Yesterday I wandered into Rubiroso on Mulberry  and got a plain slice of their classic pizza and a vodka slice, which is made with a Vodka-based tomato sauce.  Both were reheated but still very good.  The crust had spots both soft and cracker-like and was of the utmost thinness.  The cheese was a fresh mozzarella but there was still flavor to the pie.  The vodka slice was my favorite, with a rich, flavorful sauce that tasted only mildly of vodka. 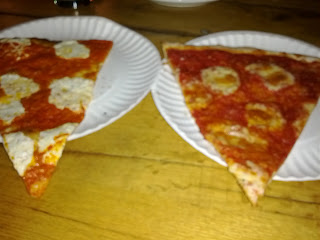 As I ate at the bar I looked up and saw Master Watanabe smiling at me.  I went back to eating and then, when I processed who was before me, I looked up again; he was gone.  I turned from side-to-side but he was nowhere to be found.  Damn the ninja goats.  You can kill a man but not destroy him.