I lust after the roasted meats of China.  To tell you my story, ever since I was a little chico, I thought about Chinese meats and ate them profusely. Eventually, I was banished from my home and went out into the world with only one mission: to eat Chinese roasted meats. After many years of repeated assaults on roasted meats, the authorities captured me and placed me in a maximum security roasted meats prison, which was headed by an evil warden named Don Bacon.  It was a treacherous place, yet I am not one to accept such a fate. I grew stronger and slowly and patiently devised a plan of escape.

Perhaps another time I shall further illuminate you on my masterful prison break, yet currently I feel compelled to report on my adventures in roasted meats. Yes, now that I am back on the prowl, I shall once again return to the streets of roasted meats.  The authorities are on high alert, and my picture is everywhere.  They are coming after me.  But I will never cease my adventures, for how can a man refuse the very thing which provides meaning in his life?

The first place I went to was Kim Tuong, a humble shop on Chrystie Street in Manhattan's Chinatown (the Yelp entree lists it as Kien Tuong, yet it is not uncommon for the roasted meat houses of Chinatown to go by various names and transliterations).  "Kim Tuong" (or Kien Tuong) is apparently a Vietnamese phrase, and there has been some confusion and speculation as to what kind of restaurant it is.  The wonderful blogger at LauHound traces an element of Chiu Chow cuisine, which is the cooking of Cantonese immigrants in Vietnam.  I will not go into the various arguments for or against this theory; rather, I will simply say that Kim Tuong has some of the finest roasted meats I've tasted. 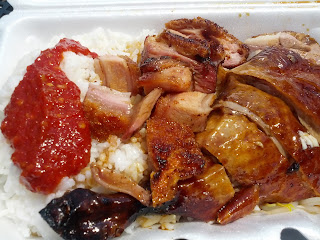 On a recent trip I had the roast duck/roast whole pig with rice platter, which lowered my financial ledgers by $5.50.  The duck was perhaps the finest variety I've had in a Chinatown meat establishment.*  It had a fine, crispy skin and flavorful meat that was not overly fatty or slimy, as is sometimes the case.  The roast whole pig was an absolute revelation, a mass of pork belly with an intensely flavorful and crispy and crunchy skin with absolutely moist and tender, salty meat.  I was in whole pig heaven.

A later expedition centered on Deluxe Food Market, which is a fun place indeed, packed mostly with Chinese patrons, crowded as all hell.  Through some efforts we were able to procure some roasted meats.  Again I went for a roast duck/whole pig platter.  These were respectable enough renditions, although they paled short in comparison to Kim Tuong.  The whole pig, in particular, did not have the intensely salty and porky flavor, and the skin, although certainly crisp, was not in the same league. 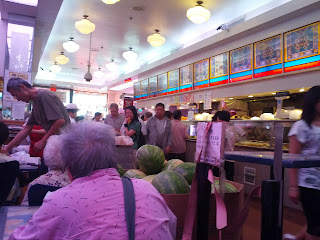 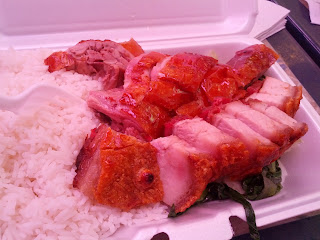 As I was wrapping up my meal at Deluxe Food Market, an undercover agent unsheathed his sword and went for the kill, yet I dodged his feeble attempt and ran him through with a sharp banana that was sitting on a nearby table.  Aha!

But then, one more, two more, five more attacked me.  I am a stealthy fellow, but it was too much even for I.  One of the agents crushed my head with a watermelon, and that was the end of me.  Farewell cruel world and roasted meats. 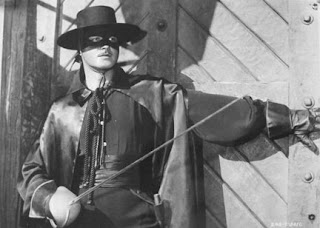