The Mystery of Sal & Carmine's

In the summer of 2000 I moved to New York, my first apartment on West 98th Street near Broadway.  I walked around my new neighborhood and one night happened upon a slice shop with neon signs, signs that beckoned to me.  I entered.  I ordered a slice.  It was great.  An incredible New York slice, with salty, tangy cheese.  The two Italian men manning the shop were efficient and gruff, one slightly more pleasant than the other.  I had had my first Sal and Carmine's experience.

Sal (the more pleasant one) passed away in 2009.  Sal's brother Carmine, and grandson Luciano, continued making some of the best pies in the city.  Carmine, sadly, seemed to decline, but he was usually there.  Luciano carried on the tradition.  Around 2013 I left the neighborhood, but would return now and then for a slice, and Luciano was always there.

Fast forward to late May of this year.  I went to Sal and Carmine's, and upon entering, Luciano was nowhere to be found.  There was a man I had never seen manning the pizza oven, and a young lady (who was way too friendly for Sal and Carmine's) taking orders.  Normally at Sal and Carmine's, there would be maybe 3 or 4 pies, often less, sitting on the counter, waiting to be ordered.  This time, there were far more, including a white pizza with globs of ricotta.  I hesitatingly ordered a regular slice, but something wasn't right.  In recent years I did notice that Luciano had people working for him, but Luciano, the heir, was always there.  Was he taking a day off, and leaving the shop in the hands of others?

I took a bite of the pizza, and it just wasn't the same.  The crust was not the same.  The cheese didn't seem as tangy.  It wasn't a bad slice, but it didn't possess the Sal and Carmine's greatness.   Interestingly, I noticed new pictures placed on the wall, pictures of Sal, Carmine, and Luciano.  But where was Luciano?  I started to feel queasy.  Had Luciano sold the family business?

Yesterday I returned and, again, Luciano was nowhere to be found.  The same man who had manned the oven the previous time was there, this time alone.  There was the white pie, and also a pie with lots of veggies on it, a pie that would never have been sitting around in the Sal and Carmine, or Luciano days.  "Where's Luciano?" I asked?  The man said something about not seeing him recently.  "Does Luciano still own this place?" I followed up.  The man seemed a little nervous and said "yes."  Perhaps Luciano does still own but has completely walked away from the operation?  Or perhaps the business has been sold?

All I know is that Sal and Carmine's feels different. 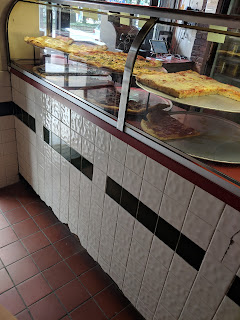 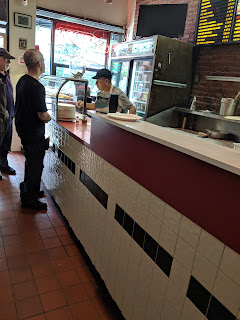