The Pale Rider often rides alone, but from time to time he allows a companion to join.  Such was the case yesterday, when Dr. Aziz, loyal friend and food lover, joined me for an expedition in search of British food.  Indeed, as mentioned in a prior post, it was the promptings of Dr. Azis that got the ball rolling for my search for British sweets, but nature took its course and prevented such happenings.  Yet I've always found that if you're patient you can always find your moment, and yesterday proved to be a lovely day, ripe for an adventure.

"Shall we go to Chip Shop," texted Dr. Aziz.

Now, Dr. Aziz met me at the agreed upon time riding a rather embarrassing steed, and I did my best to act polite and not laugh.  We rode out to Brooklyn at a snail's pace, and I could tell Gerard was annoyed to be going so slowly.

Several years later we arrived, and it was worth the long journey. Now, dear friend, please sit back and allow me to show you my adventures in eating and drinking. 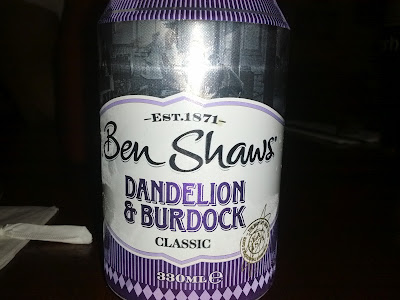 First up was this soda, a dandelion and burdock, which I was told is the British root beer.  To be blunt, I prefer the American version, yet this was interesting to try.  It tasted of licorice and grape. 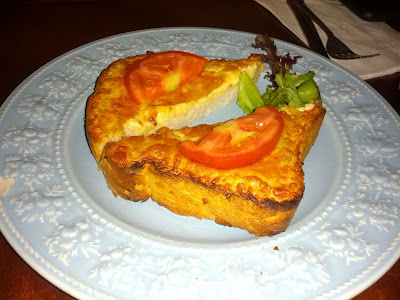 Next up was an appetizer of Welsh rarebit, an absolutely delightful cheesebread of sorts.  A thick piece of toast, topped with a sharp cheddar and bit of mustard and Worcestershire sauce, browned to perfection.  I have not known such pleasure since I stormed the Muslim castles in Jerusalem during the Crusades. 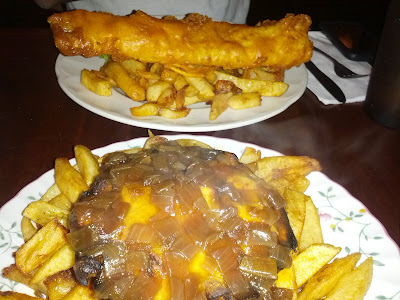 For our main course, the Doctor and I shared a steak and onion pie and fried cod, all with chips, of course.  The chips were thick cut, crispy, and ephemeral.  The steak and onion pie was beautiful: thick cubes of steak in a tart and savory caramelized onion concoction, all packed in a crusty pie.  The gravy from the onions coated the chips and really was divine.  The cod was fried to perfection and quite nice with vinegar and tartar sauce, but it is hard to compete with beef and onions in a buttery, meaty gravy. 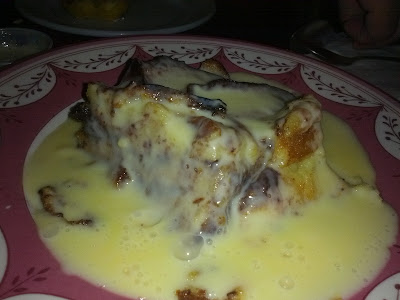 Last but certainly not least, I partook in a bread pudding topped with a liquidy custard.  I must say, old boy, I was rather full from what preceded (I ate a good third of Dr. Aziz's fries), so it was impossible to finish this rich, decadent pudding.

I left Chip Shop in a daze and it's a small miracle I made it home alive.  It's also a small miracle that the very next day I was still craving the imports of Great Britain.  I finally made my way to London Candy Company and was quite taken with the place.  You can trust that I sampled a few candy bars, yet at this point I prefer to wait before filing a full report.  You can be sure further investigations will take place. 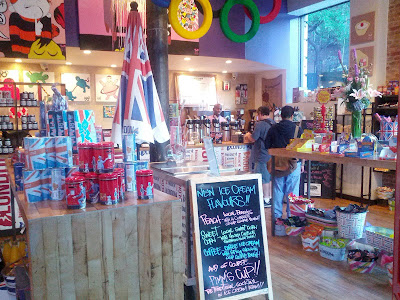 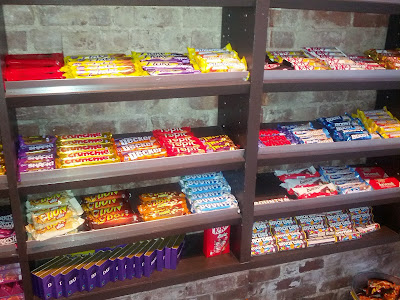