Today I had one of the most thrilling chases of my life.  It was a chase against the forces of nature, such chases being of a generally higher order than chases against other humans, which - don't get me wrong - still have their merits.  Allow me to explain myself, but first, excuse a short digression into the world of British sweets.

It was not long ago that I learned of the London Candy Company, a "boutique British confectioner." In case you don't know, British chocolate is delightful and far superior to American chocolate (or is it?).  Therefore, I had been wanting to go to this Upper East Side candy shoppe, but it just hadn't happened yet.

And then today, all of a sudden, a friend texted me asking if I would like to go to A Salt & Battery, a British fish and chips place.  Unfortunately I could not go,but  this got me thinking: A Salt & Battery is right next door to Tea & Sympathy, a sister establishment which houses a wide selection of British sweets.  The thought of British sweets simply overtook me, and I knew it was time to go to London Candy Company.

The gods, for whatever reasons, happened to arrange events so that a clearing in my schedule broke, and it was a fine afternoon.  I sequestered Gerard, and decided to go to London Candy the long way, so as to enjoy a lovely afternoon ride.  We rode gallantly down the West Side path, stopping in the Village to turn eastwards.

While stopped at a traffic light, a fine, slightly older gentleman remarked, "There are always more cars when it's nice out!"

The light changed and we both took off on our separate ways.  How could we know that a system was fast moving in?  By the time I was heading north and in the Chelsea district, it was unmistakable: a dark mass was moving in from the west, mixing with gray and misty formations. The electricity of a storm was building, and the air was turning vivid and cool.

And then it struck me: dear lord, I am wearing my new sneakers!  I had purchased a pair of green New Balance sneakers just a week prior, and I did not want to spoil them by having them soaked.  I knew I was going to have to ride like the wind and give up British sweets to save my beloved new shoes.

"Gerard," I said.  "I know I have not known you long, but you've been a good bike, and now I need you to ride like you've never ridden before.  Will you do that?  Will you come with me!"

We departed up the canyons of Manhattan, riding like the chariots of jesus.  At one point an older woman stepped out from the sidewalk and when she realized we were passing gave out a terrible scream and froze, even though she was rather far away.  Gerard and I just laughed, and I gave a little pretend "scream" back just to show her how silly she had been!

The storm was gathering force, and drops were beginning to fall.  "Faster, Gerard, faster!" I screamed.  If only you could have seen us, I'm sure you would have been moved to tears by the sight.  Yet man proposes and god disposes, and the drops turned into a steady, hard rain.  At this point we were in Central Park, so I pulled into a path of trees for cover.  We waited out the storm, Gerard and I, proud of the distance we had covered, yet humbled before the powers of the universe.

No, I did not have my British sweets today, but I gained something more valuable: a bond with my new bike.  Many more adventures we will have. 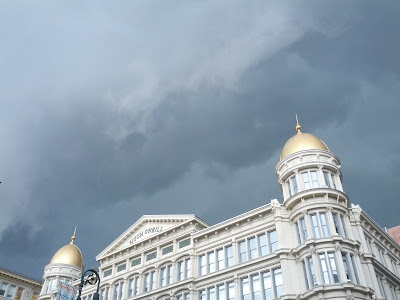 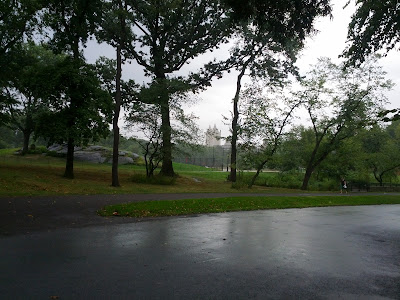