The Department of non-Chinese Asian Cuisines

On a quite beautiful recent Sunday, the sky as blue as possible, I sat reading in Brooklyn while waiting to eat at Pok Pok NY.  I was reading A Passage to India, a tale set during British control of India.  The following began chapter 14 in Part II of the book:

"Most of life is so dull that there is nothing to be said about it, and the books and talk that would describe it as interesting are obliged to exaggerate, in the hope of justifying their own existence."

How true this is of all forms of writing, but perhaps especially of food writing.  I have often thought that food writing is nothing more than silly people hyping up this restaurant or that restaurant, in an attempt to convince themselves as much as their readers that this dish was seriously awesome.

But hold on: some food really is quite good.  Yet even so, that doesn't mean it's not embellished or spoken of as if it had powers it in no way possesses.  Take, for instance, a review of Pok Pok NY in the NY Times, which had this to say:

"As I kept dunking, my perspective underwent a Copernican shift...Altered perceptions come free with the price of dinner at Pok Pok Ny."

If you've never had really good Thai food, then perhaps an experience at Pok Pok really would be life-changing.  In a certain way, experiences I've had of Indian, Sichuan Chinese, Thai, etc., have been rather revelatory, in so far as something as silly as the taste of food can be.

So I guess what I'm trying to say is this: yes, food can be amazing, yet I believe we build the experience up for ourselves (and if we write about food, for our readers) in order to feel like the world is better.

All of this being said, my first experience at Pok Pok NY was excellent.  Now that you've suffered my philosophical lecture, please enjoy this rundown of what I ate: 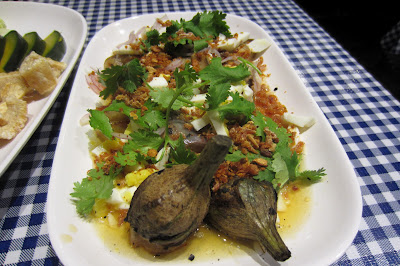 Pictured above is an eggplant salad, which, like many of the dishes, had chiles, lime, fish sauce, garlic, etc.  The eggplant had possibly the strongest and most weird eggplant taste I have ever perceived.  There was something almost disturbing about it, yet I kept eating. 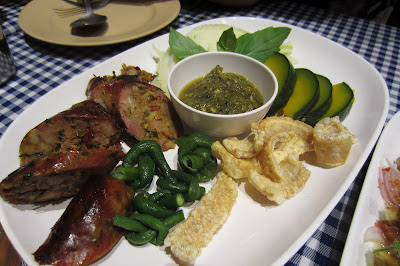 This was the dish that, for Pete Wells, inspired a Copernican shift.  In all fairness to Mr. Wells, I see his point about eating the sausage and then realizing that this dish was really about the chile paste.  However, as I had read his review, I was expecting a tasty paste, and indeed it was tasty. 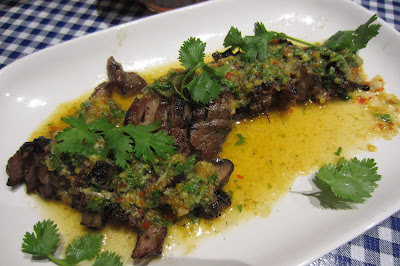 Above is the pork neck rubbed with the usual suspects.  It was fantastic.  Savory, sweet, tart, spicy. 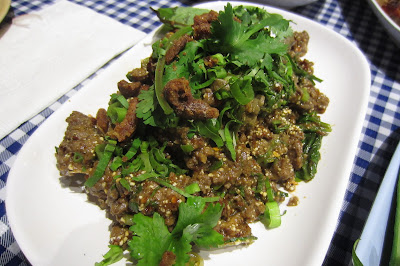 This duck salad had chile, crispy garlic, lime, etc. etc.  Apparently it also had duck liver, but you could have fooled me. 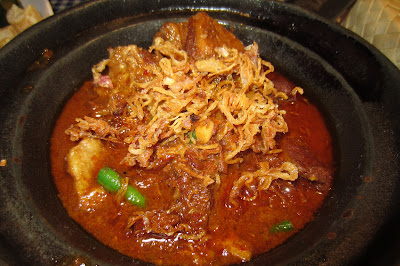 Above is a pork belly and shoulder stew, which didn't taste very "Thai" to me but was nonetheless delicious. A very rich, comforting stew. 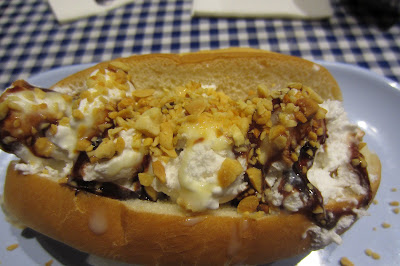 For dessert I had the coconut ice cream sandwich, which consisted of coconut ice cream topped with chocolate sauce and crushed peanuts, serviced in a sweet bun.  This was tasty indeed although not an Earth shattering desert.

So yes, I enjoyed Pok Pok a lot, it's a fun place to go, and the food was quite excellent.  I would say I still probably believe the sun revolves around the Earth, though.