I can't remember when I first heard of Uncle Zhou, a Chinese establishment in the Elmhurst section of Queens.  I was never really sure what kind of food it was: Sichuan? Hunan? Henan?  I wasn't sure.  But I had heard of it.  It had come up.  I wanted to go.  On Saturday  I went.

I took the R train and as I ascended onto the street I found that the weather had changed, and it was an admirably crisp and mild evening, sunny too.  I was early so I explored Elmhurst and found a huge shopping center.  There was a Red Lobster, Outback Steakhouse, Target and Best Buy contained within this "center."

I considered purchasing some cheddar biscuits from Red Lobster, a bloomin' onion from Outback, an iPad from Best Buy, and then going to Target, sitting down on a recliner in their furniture section, and then watching YouTube videos while smearing biscuits and bloomin' onion all over myself.  I decided not to do this. 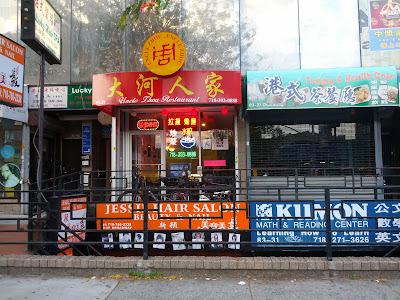 Uncle Zhou.  It's a small place filled with families, mostly Chinese, eating.  It is a Henan restaurant, and it specializes in the noodles of that region.  My friend and I ordered knife pulled noodles with egg and tomato, and also pork in fresh hot pepper. 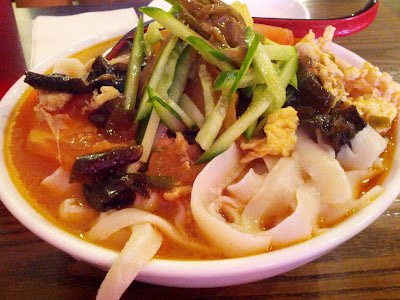 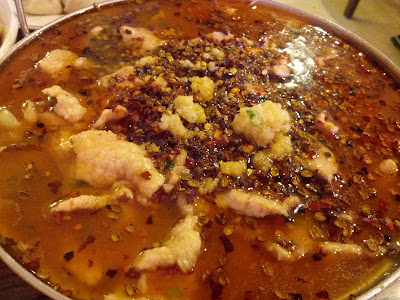 The pork in fresh hot pepper was similar to the Sichuan version, although there was more liquid.  Oh, the intoxications of bubbling cauldrons of hot, Sichuan pepper infused oil!  How I yearn for these cauldrons; how I am enamored with their mystery.  It was a bubbling, messy cauldron indeed, as my shirt and my friend's shirt can attest: we splattered the oils all over ourselves and each other!

This was a fine meal.  Next time, I might order the cauldron and an order of plain noodles and soak the noodles in the cauldron.  Cauldrons!