Yay, the seasons change, from the renewed warmth and color of spring to the bright heat of summer, to the autumnal coolness, to the frigid white of winter; yet indeed there are days when the air doesn't match, when the warm freshness of spring peaks into the days of January, or when the gray chill of fall arises in June. Such was the case on Friday, only in this case it was Sichuan food that made an appearance within my season of Cantonese.

The plan was to meet at Oriental Garden in Chinatown, a popular Cantonese seafood house. and indeed we did meet, but some of my companions, after further reflection, felt the desire to find a more budget-friendly establishment, and far be it from me to refuse such a posture.  It is a long story involving a smart phone and an elf-life creature, but fortune brought us to Famous Sichuan, which I had never heard of.  SeriousEats, I later found out, profiled the establishment, which has a reputation for offering respectable, reasonably priced Sichuan without the crazy waits you can find at some places, least of all Joe's Shanghai, which is right across the street.

We wondered in to a find a relatively empty space, filled with the aromas of chile oil and Sichuan peppercorn, a few of my favorite things.  We ordered some standard Sichuan dishes and all were good - perhaps not has refined as what can be found at Cafe China, or maybe not as well-prepared as what can be tasted at Little Pepper in Queens, but very enjoyable, nonetheless. 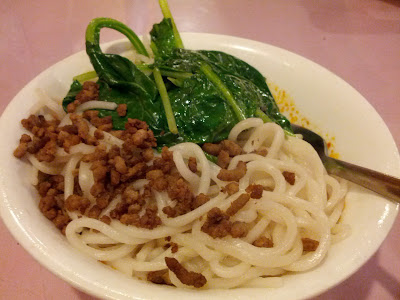 Dan Dan noodles were perhaps furthest from the mark, with a slightly rough sour taste: still not bad, though. 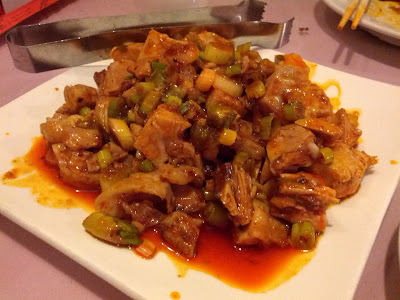 Diced chicken with red oil was similar to versions I've had in other Sichuan establishments and, like others, was revalatory.  Who knew that pieces of chicken soaked in Chili oil could somehow manage to be refreshing when served cold?  The scallions add crunch and pungency. 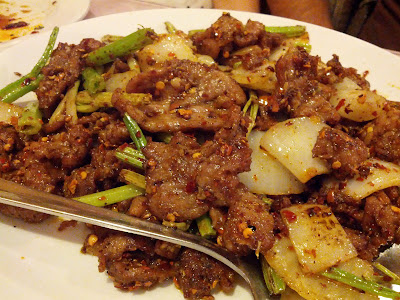 Lamb in cumin sauce was absolutely solid, the cumin adding its usual earthy richness to the lamb, which is already an earthy and rich meat.  The leeks and scallion offer a nice contrast. 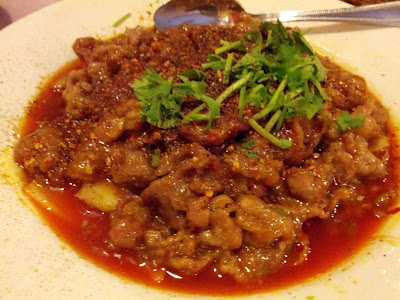 Sliced pork in Sichuan sauce was flavorful, with slightly fatty cuts of pork soaking in chile oil and topped with a generous dusting of Sichuan peppercorn.

In conclusion, although the plan had been Cantonese, it is difficult to be upset when instead you find yourself dining on Sichuan.  It is like expecting a frigid February evening only to find a delightful balminess in the air.