When I was training at the Milford Dairy Farm in central Pennsylvania, milking cows, churning creams, my boss and mentor, Jack Hempifriend, or Lord of the Creams as I used to call him, often said a proper cream must fit the situation. I was never quite sure what he meant until this weekend.

Il Laboratorio Del Gelato is a fine gelato shoppe on East Houston that serves many forms of, well, gelato.  It was a delightful summer evening, warm but not too hot, and I wanted a cream.  My friends and I ended up at the Lab, and I started feeling as if I wanted a sundae.  Was such a thing possible?

The short answer is, well, yes.  At least sort of.  They have featured toppings such as hot fudge, caramel sauce, and whipped cream.  They don't call them sundaes, but if one orders gelato with the toppings of hot fudge and whipped cream, that's pretty much, well, a sundae.

I ordered a scoop of peanut butter and a scoop of cinnamon, and just the whipped cream, as they were out of the various sauces.  So I wasn't able to have a sundae, but no matter, as I was really after creams of the whipped variety.

I expected a place like Il Laboratorio to make its own whipped cream, but I was sadly mistaken.  They used a canned cream, and I must say my heart sank as the pudgy, rodent-like associate retrieved the offending can from the fridge.  As he pressed the plastic nozzle and the sound of aerosol filled the room, I knew exactly what the Lord of the Creams meant when he said a proper cream must fit the situation.

What he meant, if you are too obtuse to understand the moral of this story, is that a "first rate" gelato shop like Il Laboratorio should make its own whipped cream.  Tonight I had a chocolate milk shake from McDonald's, where they used a canned cream.  This is fine, because it fits the situation.  A canned cream at Il Laboratorio is like a goat trying to play dodgeball.

I will say the gelato itself was quite enjoyable, the peanut butter rich and the cinnamon spicy.  Fine creams topped with subpar creams.  The Lord of the Creams would not be pleased. 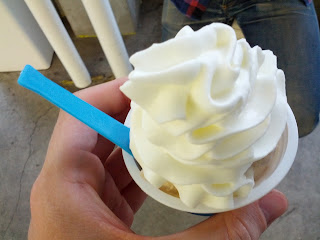