Let the record show that I attended Smorgasburg this past weekend. The weather was nice, there were many young and attractive people (myself first and foremost among them), and there was lots of delicious and artisanal food. A quick rundown of what I consumed:


A fried clam sandwich from Shucks Clam.  Plump, expertly fried, and tasting of sea brine, it was an enjoyable sandwich, although I wished I just went with the platter so that I could have enjoyed the clams uninhibited.


A vodka pizza from the mobile unit of Rubirosa.  A thin crust which has some ply but also modest cracker elements, the vodka sauce is rich and flavorful, slightly creamy with a mild yet perceptible dose of red pepper, and a full-bodied mozzarella.  One of my current favorite pizzas.

A dulche de leche donut from Bedford-Stuyvesant based Dough.  I am not super into donuts, but a fine donut with a masterful, fluffy dough. 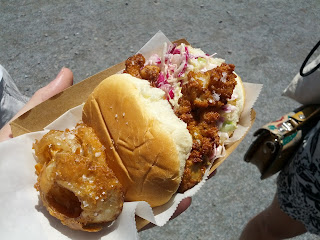 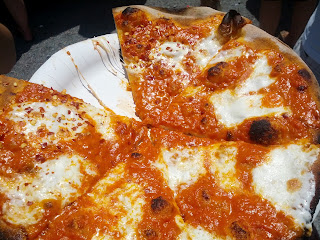