Hello. 'Tis been a long time since I've documented my adventures in creams. However, do not let this fool you into thinking I have not been eating and caressing creams of all shapes and sizes. Trust me, I've caressed many creams.

Before I delve into the latest madness of the creams, let me tell you about one thing I've been doing with creams: I've been mixing ice cream with Trader Joe's Cookie Butter, aka speculoos. Speculoos is a godly cookie, similar to what you might get if you bred a graham cracker with a ginger cookie. These cookies have been turned into spreads, which have the consistency of a fine peanut butter. It is simply one of the most scrumptious of all spreads, and Trader Joe's has delightfully branded it as Cookie Butter. This butter, mixed in with ice cream, is a cream worth dying for.

Now, the matter at hand. Shake Shack. It is a well known fact among readers of these Chronicles that I procure huge supplies of creams from Shake Shack. Their custard is dynamite. Therefore, I was obviously excited when I received intelligence from a friend that Shake Shack was bringing back its Pie-Oh-My concretes, this time with blueberry pie. What are these treats, you ask? It's a piece of pie smashed into vanilla custard. It's creamy and sweet and fruity and delicious.

My friend got the dates wrong, so on my first attempt, I was forced to go with a vanilla custard with the seasonal fruit, roasted peaches, and shortbread cookies. The shortbread cookies add a fine cookie crunch, and actually, with the fruit, emulate a Pie-Oh-My quite well. The next day I returned to have the Blueberry Pie-Oh-My, and it was stellar. I returned the next day and had another.

The following day, I needed to (sadly) be on the Upper East Side. The only redeeming factor of the Upper East Side is that their Shake Shake still makes whipped cream, which was tragically pulled from all other locations. I decided to stop in for a sundae. It was a hot day, sweltering, in fact. I took my sundae outside and began eating and starting feeling uneasy: was this real whipped cream, or had it come from a can? The texture was not as thick, and the taste not as rich, as real Shake Shack whipped cream. Perhaps the stifling heat had damaged the cream??

Further investigations are warranted. Please god, tell me the UES Shake Shack is not using canned cream. My heart could not take that. 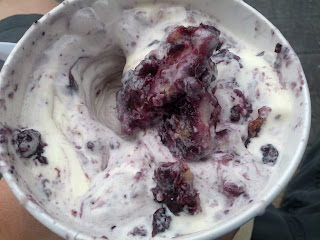 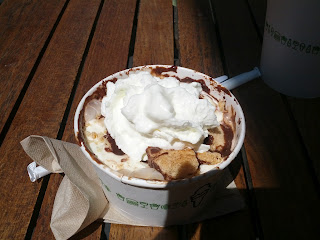