As I cruised down the West Side Highway on Traveler (my bike), I contemplated what lay ahead of me.  I had decided to attend Pizza Suprema for a slice after reading some favorable mentions (here and here). The latter, in particular, raved about the slice at Suprema, calling it "great" and citing the cheese as "delish." Would the fanfare fall into the all too common category of pizza inflation?

First, a note on the place itself: it's quite cool.  It very much feels like a slice place from Old New York, perhaps circa 1977.  Sinatra sings, the walls reflect (because they're lined with mirrors), and the patrons are working class with thick Metro-area accents.  They seemed to be grabbing a piece of pizza before catching a train at Penn Station.

Now the pizza: the sauce, sweet; the crust, floppy; the cheese, blandish; the sum, fine.

Yes, this was certainly a pretty decent New York slice, but hardly worth mentioning other than the atmosphere it was served in.  The pie from which my slice was cut had been sitting out long enough to reach a room temperature, with the cheese starting to congeal a little, while still retaining some moist freshness.  I avoid getting pizza reheated at all costs, so it could have been better freshly out of the oven.

It didn't make me throw up, which is a good thing, but it was hardly "great."  As I rode home, a stocky gentleman riding his bike in front of me revealed ample amounts of butt crack, sadly the most noteworthy item of the trip. 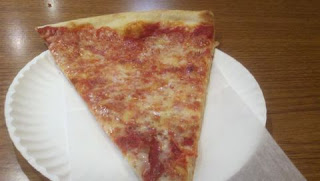