This weekend I visited Blue Smoke, the barbecue house built by Danny Meyers.  Reading an old NY Times review from 2002, I was reminded of a time before smoked meat invaded the City.  Now, post invasion, although ribs, brisket, etc. may not be the current rage, barbecue has long since secured a place in New York.

Consider the idea of barbecue: fatty cuts of meat cooking at low temperatures while absorbing the complexity of various types of smoke.  One hears of the regional styles from the South, and one imagines good, primal eating.  Barbecue, then, is a powerful idea.

Frankly, I've had plenty of enjoyable barbecue, but none that meets the ideal which exists in my mind.  Blue Smoke was no different.  I had the pulled pork, and it was meaty and enjoyable, especially with the Carolina-style vinegar sauce, but it wasn't extraordinary.

What was noteworthy: the spicy cheese fries -- fluffy strips of potato with a salty, crunchy exterior, supporting a voluminous glob of thick cheese sauce.  Completely lowest common denominator and excellent.  Also: the banana cream pie, which was bananas lightly cooked and cream on top, with walnuts for good measure.

I would be happy to hang out at Blue Smoke's bar and eat nothing but those fries and pies, while perhaps enjoying a fine ginger ale. 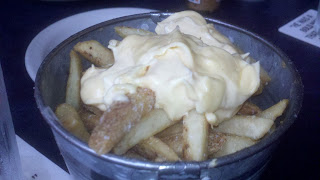 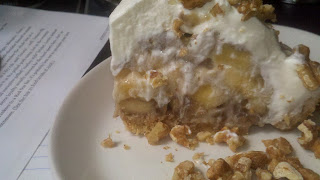