I have problems, because I simply cannot stop eating the foods I'm obsessed with.  Right now, it's fried chicken, Chinese, and all manners of dessert, but especially those with some sort of cream.  A whipped cream, for instance.

I spend roughly 3 hours a day pondering about Chinese food.  How did it develop?  How does Chinese food here differ from Chinese food served in the homeland? There seems to be some sort of idea of what Chinese food should be in another place, whether it's New York or Iceland, and Chinese people cook to this idea of their cuisine when in foreign territory.

My experience this evening, Sunday, March 25, 2012, at Hyo Dong Gak was interesting in that it was a Sino-Korean restaurant owned and operated by Koreans.  In other words, Koreans were cooking a type of food that had been adapted and served to them in their homecountry here in New York, ostensibly for Koreans who missed that particular type of Chinese food.

But not so fast.  Allow me to preface my tale by coming out and just saying it: I am white.  Now that we have that out of the way, let's continue.  I arrived before my friend - who is Korean - and took a seat.  I was quickly served some crispy noodles and sweet and sour orange sauce, much like you would find in any American Chinese place.  Menus were brought to the table, and while browsing as I waited for my friend, I noted the items looked exactly like what you would find in any Chinese place in New York or Minnesota or, god forbid, Baltimore.

My friend arrived and we began discussing matters.  "How is this different than any other Chinese place," I asked him.  He looked a bit confused.  Then, all of a sudden, a server appeared and gave us two new menus.  Aha!  I had been typecast and given American menus.  Once the Korean arrived, they realized their error.  My friend also looked confused by the crispy noodles, and as we looked to the other tables filled with Koreans, not a crispy noodle was to be found!

Even now, I am insulted and hurt that even though I'm white, they were not able to detect the strong odor of Adventurism which pungently seeps out of my pores. 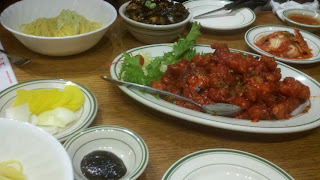 But yes, the food.  The staple of Sino-Korean cuisine is noodles in a rich, black gravy studded with onions. This is something that marks a difference between Anglo-Chinese and Sino-Korean.  I have actually had this dish before, and it's homey, thick, and strangely addictive.  We also had a chicken dish, which looked like sweet and sour chicken. The taste, though.  There was garlic to be sure, and the subtle heat could not be denied.  This was surely more savory than any sweet and sour chicken I've had.  It reminded me of Chili Chicken, a dish you sometimes find on Indian menus.  The intoxication was complete.

I bade farewell to my Korean friend and gave an arrogant nose exhale to the staff of the restaurant, as if to say, "ha, you thought I was just some silly American who wanted chicken with broccoli."  Unfortunately, I'm suffering from a cold and a load of mucus was blown down onto my upper lip, which was quite embarrassing. They all chuckled as I walked out.

But really, they were the ones who should be embarrassed.  On my bike ride home, a homeless gentleman gave me a nod and said "hey there, champ!"  I nodded back and thought to myself, indeed I am a champ.