The Annals of Fried Chicken

"Jesus," I thought as I looked at my watch.  It was past 11:50 in the morning, and I was due to meet my fried chicken buddy Han for fried chicken and pie at 12:30.  The destination being The Dutch, I had less than 40 minutes to prepare the BatMobile and head down to SoHo, a distance of some 7 miles from my Upper West Side bungalow.

"Jesus!" I cried (my butler's name is Jesus), saddle up Jesus at once! (my bike's name is Jesus).  I dashed to my study and pulled my original edition of Moby Dick, causing the bookshelf and the adjoining portion of the floor to revolve into a secret passageway.  Jesus and Jesus were waiting for me, and I quickly mounted the latter and bade farewell to the former.

I bolted down the West Side highway, and I am pretty sure I heard the Danny Elfman theme playing as I rode.  "Aha!" I screamed into the early afternoon air.  Quite a few people gave confused looks, but I didn't have time to explain things to them, so I left them in their befuddlement.  Better they get used to uncertainty, I thought.

I will not go into my encounter with the Joker now, but let's just say his smile has permanently been turned upside down.  I made it to the Dutch with time to spare, and took it all in.  "So this is the Dutch," I told my friend.  The Dutch is a rather hip place, and I've read quite a lot about it.  It was pleasant inside, with some very cool old school maps of New York on the wall.  I love old maps, so the Dutch was already doing quite well.

The hostess and server were attractive, and quite nice and unpretentious, I thought.  Yet another point for the Netherlands.  But how would the food be?  I was already concerned.  I am always concerned when I try new fried chicken.  Fried fowl so often disappoints, and highly regarded fried hipster fowl disappoints to a disproportionate degree.

Fried chicken was not the only objective of this mission, however.  Pie was an equally important part of the strategy.  Sam Sifton, at the Times, basically called the Dutch's pie the best in city.  I am not sure I can trust this Sifton character, though. Let me explain why.

Sifton, in his list of 10 best new restaurants, cited the Dutch as number 1.  That's not the issue.  The issue is this offending passage:

"Then eat pie and more pie, in a restaurant filled with New Yorkers pleased to be New Yorkers, eating in a New York restaurant, in SoHo in 2011. The Dutch, ladies and gentlemen, is my restaurant of the year."

I doubt I have read a smugger set of sentences in my life. You can see, then, why I doubted Mr. Sifton.

Now, to return to the food. How was it? The fried chicken was truly excellent, and I can say that without any qualifications. It was a little different than many NYC fried chickens in that there seemed to be a healthy amount of either cayenne pepper or hot sauce or both used in the preparation. It gave an excellent but not overwhelming kick to the chicken. The meat was flavorful and most, and the skin and crust were crunchy. Completely satisfying. 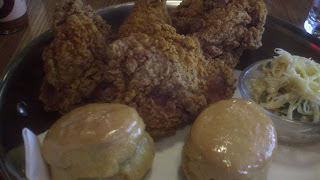 The pie. I had the banana cream, and my friend had the lemon meringue. Mine was enjoyable, with a very light banana cream filling. The crust was dark and seemed to be a graham cracker variety, at least in texture, though not in apparent taste. I was slightly put off by it, but only slightly. The pie was served with a citrus sorbet, which was tasty, but I was left wondering why a sorbet would be served with banana cream pie. Perhaps I have a poor imagination. 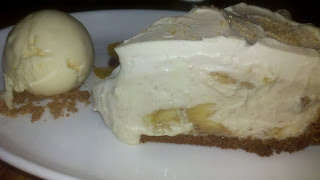 Thus concluded my fried chicken and pie invasion. I felt unusually full afterwards, and was concerned my bike ride home would not go well. I thanked all three Jesus's that I made it back safe and sound.
Newer Post Older Post Home