When Abraham Lincoln succumbed to his gunshot wound on the morning of April 15, 1865, his Secretary of War, Edwin Stanton, famously said, "Now he belongs to the ages." It was a rather powerful and even touching remark if you ask me (and I'm not so sure you did ask me). It also happens to perfectly describe the now mythological Lincoln, who has captured the historical imagination like very few others. 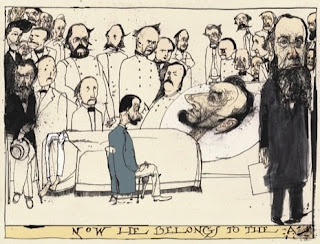 What did Stanton say? (image courtesy of the New Yorker)
In a quite interesting article published over a year ago in the New Yorker, the possibility that Stanton said "angels" and not "ages" is discussed. This would quite strongly change the meaning of what was said, and for someone like myself who is rather secular, I'd be somewhat disappointed.

Well, it is not very well known that in an alternate universe, one very similar to our own, Snuggles was President of the United States during the Civil War, although this war was fought not over slavery or state's rights, but over the right to be cozy. President Snuggles believed that coziness was the right of every man, woman and child - not just the privileged elite.

Sadly, as in our own universe, just days after the Cozy War ended, President Snuggles was shot in the back of the head and died the next morning surrounded by more people than could actually fit in the room. Edwin Stanton was also Secretary of War, and, until now, it was believed he said, "Now he belongs to the pillows." However, newly uncovered evidence suggests that what Stanton actually said was, "Now he belong to the minnows." This, indeed, would seem to fit with Stanton's love of small fish.

It is impossible now for us to ever know what Stanton said in this universe (age or angel), or in the alternate one spoken of herein (pillows or minnows). Regardless, in this universe or the next, I think we can clearly say that this Stanton fellow was quite the eloquent speaker. 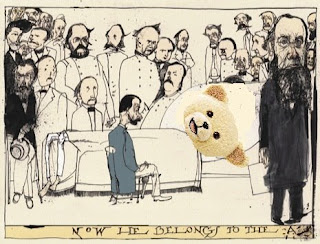