This past Friday I drove from New York to Columbus, and on the way a friend and I decided to stop in Trenton, New Jersey to try their "tomato pies." Trenton is known for having a venerable pizza tradition, and I was excited to finally try one of these tomato pies.

The story goes that they are called tomato pies because they first put on the cheese, then the sauce. I am not sure if this is actually the case. All I can say is that I went to De Lorenzo's on Hamilton Avenue, and I was a big fan of the pizza. 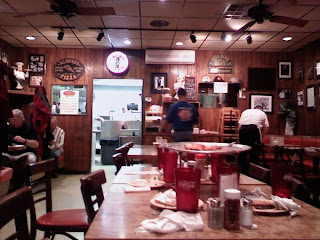 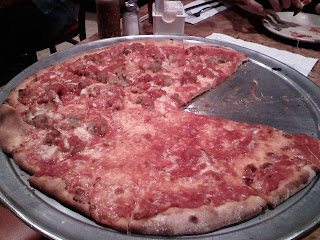 We got half plain, half sausage and onions. It's always a good idea to get plain as a base of comparison. 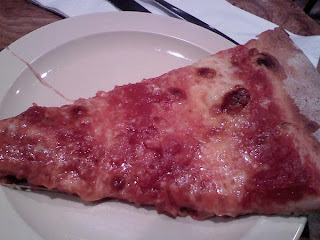 I was a really big fan of this pizza. The crust was crunchy but soft and tender. The cheese was nicely browned. The sauce was startlingly fresh and flavorful. My friend did not like the pizza as much as I did, but he's an idiot so it doesn't really mater what he thinks.
Newer Post Older Post Home