Several years ago I was offered a job as a pizza maker by a very prominent New York City pizza mastermind. For reasons I do not care to go into (laziness and fear), I decided not to take the job. Granted, this was when I was a teacher and it was only going to be a summer job. It's not like I was giving up my cushy NYC special education teacher gig.

Anyway, the regret I have been living with has been profound. My professional life is an absolute joke, and I am in no way doing anything that might be considered "meaningful" or "self-fulfilling." Anyway, Jim Lahey, the man behind the wonderful Sullivan Street Bakery, has decided to open a pizza restaurant, and according to the Serious Eats preview, it looks great. 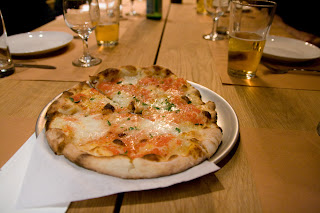 Basically, I am thinking I should try to get a job at this new place making pizzas. Then I could actually feel good about myself and feel like I'm doing something cool and worthwhile. I guess my only concern is no health insurance, but I'd probably be so happy that I would never have any issues or worries.

Anyway, who thinks I should quit my job and apply for this job? If I'm not hired I could always get a job at Subway making pizza.
Newer Post Older Post Home