Metaphor for Life Becomes Not Just a Metaphor

Someone once said that life is basically taking the subway a great distance for Trinidadian food, realizing you don't know where you are, and returning and eating Indian and Korean fried chicken relatively close to where you started.

This LITERALLY happened to me this weekend.

I decided I wanted Trinidadian food and therefore took it upon myself to venture to Queen's. I did a little research and my mind rested on a place called Singh's Roti Shop. I briefly looked at the map and thought I knew where I was going, thought being the keyword.

Before getting on the subway I thought it would be a good idea to stop at Starbucks to get a latte, and therefore I did. "Yes, I'll have a decaf grande vanilla latte, please." Decaf - that proved to be a mistake. 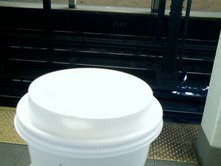 Waiting for the train with my Starbucks decaf latte

And so I set forth on my journey, transferring to the A train at 59th street, where I thought I would remain for the rest of the trip. Well, I sat down and relaxed and after a while we were in Brooklyn, and I thought to myself, hm, I'll just rest my eyes. As it turns out it was more than a little resting of the eyes, and it was not until much later that I realized I missed my stop. I was in the marshlands of Queens and had to take a train back to the proper stop. 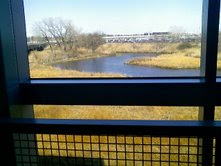 As you can see, the marshlands of Queens

Anyway, I had to take the train back, but then I realized I was on an express and only the local stopped at the station. And so I had to get off at an express stop and wait for a local. Then I looked at a map and realized I didn't even know the right stop. I actually had no real clue where Singh's was.

In a state of total despondency, I headed back to Manhattan. I got off at Chamber's Street and went to the Pakistani Tea House, where I had chicken tikka masala and various vegetables. Then I went to BonBon Chicken and had their 'spicy' Korean fried chicken wings, which, for some reason, came with a 'bun.'

So yeah, I really have no idea what happened today. 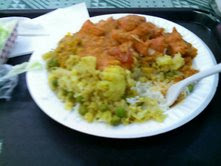 Pakastani Tea House - This looks like a glop of stuff, but it was a good glop 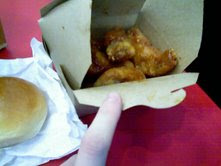