The Delicate Art of Tapering & Untapering

I had two pairs of slacks that I liked in many ways, including the color and fabric, but not in another important way, namely the cut. To be more specific, the leg was way to wide. I thought that maybe I would just have to throw them away, but then it was suggested that I take them to a tailor.

Of course, I've been to a tailor before, namely when I needed a suit tailored. But it never really even occurred to me that a tailor could alter more casual pants. Of course he or she can!

Anyway, I went to a tailor and asked that the pant legs be taken in a bit so there wouldn't be so much room around my leg. Well, a few days later I picked up the pants, anxiously walked home, and tried them on. There was a problem, however; namely, now they were too tight! I needed to have them slightly untapered! I went back and the tailor was able to do this, and now the pants fit great, BUT..

Now there are some slight marks where the stitching had been. They're still good slacks but it's slightly embarrassing walking around with what looks to be two pin-stripes going down the inside seam. 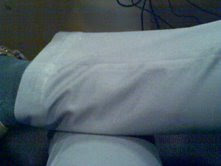 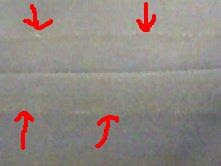