Has the Old Man Finally Lost It?

DiFara's Pizza is widely reputed to be among the finest, if not the finest, pizza shoppe in New York City. I first sampled DiFara's pizza in the summer of 2004 when I moved to New York. I was stunned. I had no idea pizza could taste so good.

Back then, DiFara was in its heydey. Dominic DeMarco was at the height of his powers. This lasted for a couple of years. But more recently, I have noticed a bit of a decline. I am not alone in my observations. The internet has been abuzz of such talk.

DeMarco has always used the best ingredients, and indeed his extra splash of pure olive oil and the sprinkling of gran padano cheese have made his pies what they are. But it seems the master has gotten lost in his genius, becomming obsessed (and I don't think there's any other way to put it) with his special ingredients. What was once a splash of olive oil has turned into a drenching. What was once a dusting of gran padano has turned into a full-blown Nor'easter of gran padano. DeMarco has even taken to cutting practically an entire bushel of his fresh basil onto the pies. Now, a little basil is awesome, but this guy goes all Edward Scissorhands on it, and once he was even playing the soundtrack while artistically waiving his hands around while cutting the basil onto the pizza.

Anyway, EpiLog has posted a really nice introduction to DeMarco's pizza making. But wait - what's that he's wearing? A french beret? I seriously think the once eccentric pizza maestro has crossed the edge into all-out insanity. 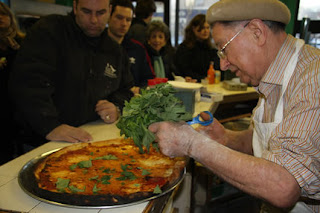 Notice the charred crust - another common problem as of late