Well, this proved to be difficult. I went to Macy's, Old Navy, the Gap, and finally Modell's. I found a Russell hooded sweatshirt at Modell's that was ok but not great. The medium was a tad snug but the large was too big. Also, the hood was kind of bulky. I was thinking of buying it but then I decided to try Uniqlo, the Japanese chain that has a 'flagship' store here in New York.

So anyway, I found a light, or 'heather,' gray sweatshirt jacket thing that I really liked, so I got that instead of a hoody. It's really comfy and I went home and put it on and took a nap.

Also, the Uniqlo bag is really awesome and features a furious young adventurer running around with some kind of laser gun. Very epic. 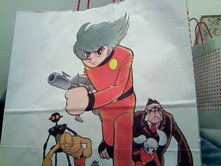 I'm coming to avenge the murder of my family!