Another Laughable Report by the Allegheny Institute 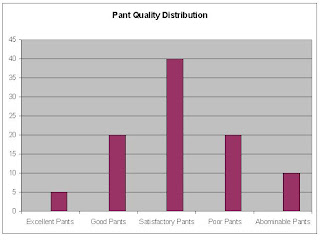 The Allegheny Institute would have you think that 70% is a good number (forgetting that a large portion of the 70% are only 'Satisfactory'). But let's just say 70% is, in fact, a good number. What their report fails to mention is access to these good pants. The fact of the matter is that a majority of Americans are subsisting on 'Satisfactory,' at best, pants. Plenty are wearing 'Poor' or 'Abominable' pants.

And, of course, there is a direct relationship between income and the quality of your pants. 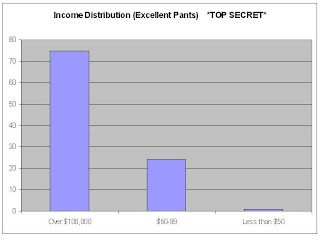 This information is top secret and was not published in the report, but I was able to get a hold of it by means of a covert operation. Anyway, when it comes to those who have 'Excellent' pants, 75% make over $100,000. A mere 1% of those with 'Excellent' pants make less than $50,000. This is a horrifying and itchy example of pant ineqaulity in our society.

And, of course, this doesn't even get into the whole problems of standardizing certain pants as 'Excellent,' 'Good,' etc. The fact is the same pair of pants might be 'Satisfactory' on someone and 'Poor' on someone else, all other things being equal.

When I called the Allegheny Institute for comment, I was told Mr. McHempy was busy in a meeting. He was probably with his tailor, having a pair of 'Good' pants altered into 'Excellent' status. Bastard.