Yesterday I was at Barnes and Noble at Union Square, killing time before seeing 'American Gangster' (which, by the way, is completely adequate and mildly entertaining and nothing more). Anyway, I had to go to the bathroom to do some 'business' so off I went.

Sadly, the two stalls were occupied but it wasn't a big deal because I wasn't in an emergency situation. So I just stood there waiting. 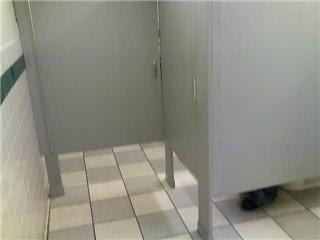 As I was waiting this older gentleman burst in, apparently in some rush. He saw the stalls were occupied and saw me standing there and said 'oh f*%k' and started pacing around. A couple of minutes later the guy in the handicapped stall (the second stall pictured above - not the one where you can see the guys pants) finished and left. Graciously, I let the man go in my stead, for he seemed to be in a great amount of discomfort.

When it was finally my turn I sat down and I wanted to get a picture of the man's pants but there were two problems. One, there wasn't a proper angle from which to get a good picture without bending down, which I didn't want to do for obvious reasons. Two, the guy had already left.

However, I did see something else of note. In a recent post I described the whole 'pants-under-the-bathroom-stall' anomaly, and a reader of this blog mentioned that perhaps Larry Craig, the senator who got in a bit of trouble for shenanigans in an airport bathroom, had in fact been checking out people's pants and not other things, as he was accused of.

Well, it seems as if Senator Craig had been in the same stall I was in. The proof: 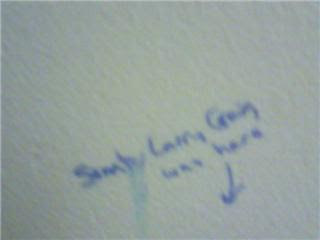 I, for one, believe that Senator Craig is a respectable, Pants fearing man who simply tries to analyze pants and offer solutions to constituents who are pooping and wearing ill-fitting trousers. I can imagine him noticing a poor-fitting pair of pants and saying, through the dividers, "Excuse me sir, but you might want to consider stopping at a JCrew or Gap on your way home."

This is something to be proud of and I think Senator Craig is paying the price for trying to promote affordable pants insurance for all Americans. The special interests are attempting to degrade Craig's character so that national pants insurance doesn't become law. As usual, rather than talk about the issues, the special interests in Washington are just launching an ad hominem attack.

Like Craig, we all have to stand up and make it known that we, the people, demand universal pants coverage. It is simply the most pressing issue of our time and it's just horrifying that other things, like the war in Iraq or health insurance, take up so much time in the campaign debates when pant insurance is barely mentioned.

Shame on the politicians - except for Senator Craig, a bold, courageous man. 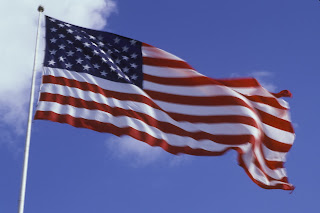 Perhaps a Pant Amendment to the Constitution?