Yogurt Perhaps Not Good for a Funny Stomache

Went to Yolato this evening, a new 'frozen yogurt gelato' place. They currently have three locations, one on MacDougal in the West Village; one on Broadway on the Upper West Side; and one in Edgewater, NJ. Four more are slated to open in Manhattan and one in Brooklyn.

So anyway, I thought it was pretty good, but not great. My Yolato companion mentioned that it's relatively healthy, so I suppose for healthy gelato it's good, but certainly it pales in comparison to the real thing.

I ordered hazelnut and pistachio, and sadly I was given green tea rather than pistachio. The green tea was fine, but I certainly would have been more interested in trying the pistachio. I also tried 'cookies and cappucino' and some strawberry cheesecake flavor or something. Regardless of the Yolato, the weather was wonderful and it was nice to just sit on the benches that you find in the 'mall area' of upper Broadway. 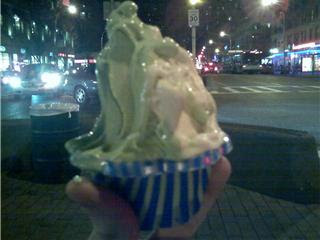 Afterwards, my companion and I went to Fairway, and I noticed some Scharffen Berger chocolate, which Ed Levine talked about on his new food blog, Serious Eats. Levine seemed pretty enthusiastic about the chocolate, but I thought it was merely fine. I mean, I suppose the quality of the chocolate was good, but maybe it was just too dark for me, even though the chocolate I had was their milk chocolate. Still, it was 41% cocao, which is pretty high for someone like me, raised on Hershey's or whatever, which, I'm sure, has far less actual cacao as opposed to milk solids and sugar and whatever. 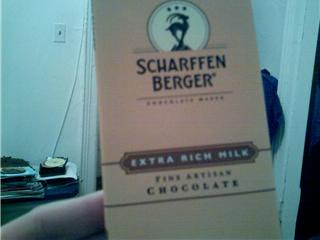 I should also mention that after buying the chocolate at Fairway, my stomach felt a little weird. This didn't come as a shock because I made 6 trips to bathroom between 8 this morning and 3 in the afternoon. I'm not sure why, the weirdest thing I ate in the past day or so was talapia from Whole Foods. Whatever the cause, I certainly had what is sometimes referred to as 'the runs.' But after 3 this afternoon everything seemed back to normal. It's funny how life will pull the rug out from under you. I was all of a sudden hit with this funny feeling and I was worried I might really have to go to the bathroom, so I jumped on the 2 express train at 72nd Street and took it uptown one stop to 96th Street and walked home. Fortunately there were no problems and I made it back safe and sound without any disasters occuring.