Rules Exist for a Reason

As I mentioned on a post dated March 25, I went to Bouchon Bakery earlier this week, which as you may or may not know, is located in the Time Warner Center. Anyway, as I entered the building my friend called to say he would be a little late, and since I enjoy pants I decided I would go to the JCrew store and browse their current selection while I waited. I had tried on a pair of their chinos in the fall and was not impressed, but things change.


I was delighted to find that they were carrying 4 different styles: slim, regular, relaxed and boot fit. The slim fit was available in a 'broken-in' wash. Now, I am often wary of broken-in washes, because it often means frayed edges and worn out pockets or things of that nature. However, I must say, in this case the broken-in wash was rather pleasant. Soft yet sturdy, no silly discolorations. I do admit the edges of the pant legs were a tad, just a tad, frayed, but only in a couple of places. I felt like the pants were still worth trying on.


Anyway, I was rather happy with the pants. I chose the cobalt blue color, 34x32, and with the assistance of Carlos, a sprightly fellow, I purchased my pants, feeling very confident.


Now, dear reader, I am sorry to say I broke a rule of pant-buying, which I myself mentioned in a post dated March 25 (See 'Pants Adventure at Macy's). The rule is: always wear the shoes you are going to be wearing with your pants when you try them on. Like a silly Pharisee, I failed to practice what I preach.


I got home, tried on the pants with the appropriate shoes, and realized they were a bit too short. Nothing serious, but I atleast had to see what the next larger size looked like.


And so the next day I found myself back at JCrew, and once again I was assisted by Carlos. To my dismay, the slim fit broken-in chinos were not available in the 34x34 size at the store. I tried on the regular fit chinos, 34x34, but did not like them nearly as much as the slimt fit, and so Carlos said we could order the slim fit pants.


Now I was expecting he would check the stock of other stores on the computer and that the pants would be sent to the store, where I could try them on when they arrived. This is not how it worked. Carlos called the JCrew catalogue, explained what I was looking for, and then I was made to speak to the JCrew representative, which was a little weird since the phone was in the dressing room. Anyway, I had to give my name and address and credit info, and then I thought I was all set.


I ate dinner at Whole Foods (and ate that tilapia which may have been responsible for the stomach problems I discussed in the post dated March 27). Then I had some time to kill and so I went to Banana Republic to try on their 'new' pant styles, which were supposedly completely revamped. As I mentioned in an earlier post, I tried on their pants back in the fall and I was not impressed.


So I tried on the Gavin fit, which is their straight fit. Quite honestly I was dismayed that they were claiming that these pants had been redesigned. They seemed exactly like the ones I tried on several months ago. I mean, the pants are not horrible, but one would expect better from Banana Republic.
Here's me trying on the Gavin fit.

Later in the evening, after my Banana Republic betrayal, I returned home to find I had received a horrific e-mail from JCrew. Here is the contents of that e-mail:


Dear JOSH
We searched from Boston to Los Angeles and were still unable to find style number 83687. We sincerely regret that we were unable to meet your expectations with this item.


This is obviously an e-mail no pant lover ever wants to get. Yet I tried to be optimistic. You know, I did enjoy the broken-in wash, but there was some slight fraying, which is not ideal. Therefore I decided to order the slim fit regular-wash chino using the online catalogue. I ordered two trousers, one in khaki and one in blue. I was amazed when I was picking out the size, for the inseams can be ordered by the 1/2 inch. I decided on 33 1/2.


On Wednesday I received the khaki pair. They had shipped separately, and as of this posting I have yet to receive the blue pair. Anyway, to make a long story short, the pants were a dissapointment. The regular slim fit was a little different than the broken-in slim fit, which is not really a surprise. I had anticipated this problem but tried to be optimistic. That just goes to show how silly it is to hope for the best.


So the fit of the regular slim fit was not great. Not horrible but not really acceptable for a lover of fine pants, like myself. Another problem was that the bottom of the pant leg was not really stitched. 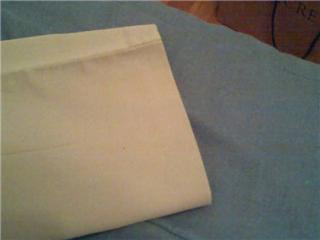 It might be hard to see in this photo, but there is no stitching across where the pant is hemmed. To show you what I mean, here is the same picture with an illustration to demonstrate where the normal stitching should be, approximately. (NOTE: For a khaki pant, the stitching should not be black - I simply used black because it shows up better). 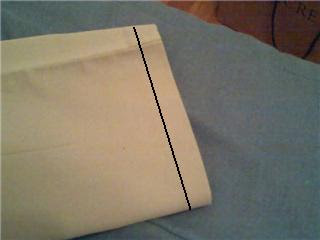 What I received from JCrew was a 'naked' pant leg bottom, which is not really good at all. If I had enjoyed the fit of the pants more, I may have been willing to overlook this inattention to detail. Yet in combination with the lackluster fit it was really just an unacceptable trouser.

So, when my blue pair of pants finally comes I will have to return them. Oh, and I should mention that I decided to keep the original pair of broken-in slim fit pants, 34x32, that I purchased on Sunday before going to Bouchon. Like I said, they're a little short, but oh well.

To summarize, I broke two rules. One, I didn't wear the shoes I was going to be wearing the pants with when I tried them on. Two, I ordered pants from a catalogue, which is really just a recipe for disaster.

Me wearing my new pants, legs crossed, thinking 'whatever.'