Spicy & Tasty is tasty but not so spicy

Finally went to Spicy & Tasty last night, the renowned Sichuan restaurant in Flushing, Queens, which I think has the largest Asian, specifically Chinese, population in New York City. I had heard about Spicy & Tasty about 2 years ago. It's always talked about on Chowhound.com, and back in November, Frank Bruni gave it 2 stars in the Times. Now out of a possible 4 stars, you might think, eh, 2 stars, ok but not great. But 2 stars is actually quite difficult to achieve, and many pricier establishment have failed to even garner a single star.

So the verdict: Spicy & Tasty is really good. What my friends and I shared was not so spicy, even though a couple of the dishes had the little chili pepper thing next to their names on the menu. It is possible that they scaled down the spiciness since we weren't all Chinese (although one person in our party grew up in China and spoke in Mandarin with the waiter). Eh, whatever.

Anyway, I was really stupid and again forgot to take a picture when everything came out. Below is a picture of the table after we were finished and some plates were taken. 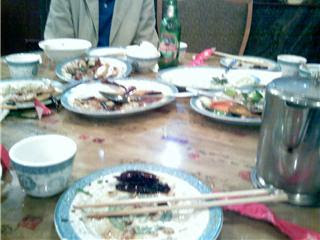 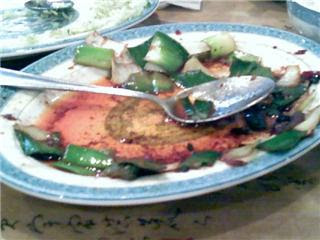 I'm definitely going to go back. From my apartment to Flushing takes about an hour. Still, the menu is quite expansive and there is much more I want to try.
Newer Post Older Post Home