Today I met a friend of mine for a snack at Bouchon Bakery, the little Thomas Keller cafe in the TimeWarner Center that people who make less than $500,000 a year can afford, as oppossed to Keller's other place in the TWC, Per Se.

I've been many times (to Bouchon), and I would say as of now my favorite things are the macaroons, which are Parisian macaroons, not the more prevalant macaroons that are ball-shaped.

Anyway, today I had two things: a jelly donut and something called a nutter butter, which was a creamy, peanut buttery substance sandwiched with two peanut butter cookies. Below are some pictures... 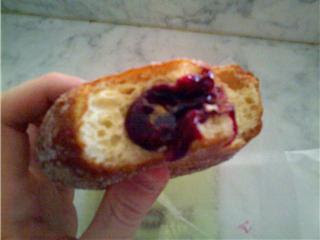 Now, when I bought the donut I actually thought it was filled with chocolate creme, not jelly. I'm really not a jelly fan. So I was a little hurt to discover the filling was rasberry jelly and not chocolate creme. The donut itself was certainly good, very airy yet substantial at the same time. But jelly is jelly, so taken as a whole I didn't love it.

The nutter butter thing was good, not great. It was extremely rich (good thing I had a vanilla latte!).

Eh, so whatever, perhaps not an amazing Bouchon experience, but still good. My friend had a spicy chicken sandwich, which he said was more like a curried chicken salad sandwich. I myself have had the ham and cheese, which was quite solid but not worth the $10 or so it cost.