Captain's log, some such year on some such planet.  I wake up, live the day, sleep, and the next day starts, all in a meaningless ebb, punctuated as often as possible by the only light in the universe, Trader Joe's.

I've spoken in this log of the genius of Trader Joe's branding, but sometimes the packaging is quite minimal and unremarkable.  Such is the case with their hash browns, which are not packaged in any interesting way.  But perhaps that's the genius of the branding: why a cute little graphic or cute little tagline when you're dealing with a bag of freaking hash browns?

Does a huge, powerful man really need to scream "look at me, I'll kill you!" or do you just know it?  Does not the powerful man who feels the need to claim his dominance in fact reveal some inner weakness?

Heat up a skillet, pour in some olive oil, and then place in some of the potatoes, no more than half an inch thick.  I sometimes put in some jalapeno and white cheddar.  Cook for a several minutes, allowing a crust to form, turn, allow a crust to form on the opposing side, eat. Such delights await you. 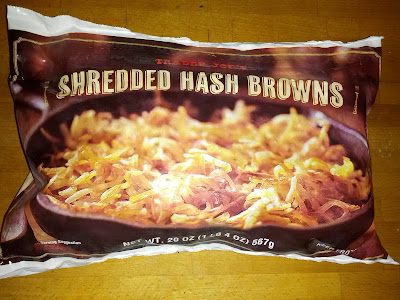 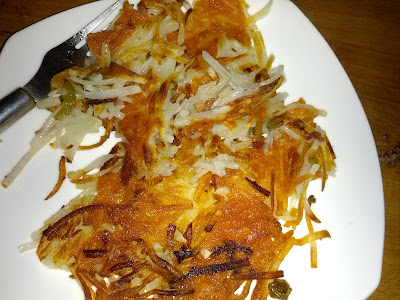