I went to Montreal a few years ago, and when I began to investigate the food situation, I was surprised to learn of the prevalence of what are basically Jewish delis.  In these delis for Jews, they serve what is known as smoked meat, which is the Hebrew Canadian version of pastrami.

Being the food adventurer that I am, this is embarrassing to admit, but I never was able to visit one of the famed delis in Montreal.  Perhaps more the better, for I now possess a mythical idea of these fabled house of smoked meats.  I imagine the European quaintness of Montreal, a snowy evening, and lots of people eating delicious sandwiches and perhaps some potato pancakes.

Now, dear reader, I mention all of this because I recently have become obsessed with Mile End Sandwich, the sandwich-only counterpart of Mile End, a Montreal expat's rendition of the French Canadian Jewish deli right here in New York.

I have had the smoked meat served on a Reuben  and it's far superior to a version I had at Katz's recently.  More recently, I tried two new delights: a fried green tomato sandwich, which was a special, and a smoked lamb sausage on a roll, which is part of the regular menu.  Both were unbelievably delicious, and pushed the boundaries of how enjoyable food can sometimes be.  Yes, food is often over hyped and not really that good, but I dare say I feel the sandwiches at Mile End are some of the most delightful bastards I've ever tasted. 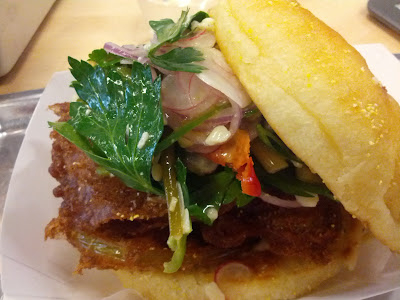 The fried green tomato was richly fried, and the slight tartness and refreshing coolness of the tomato was benevolent.  The English muffin was buttered and warm,  and inside there were jalapenos, blue cheese, and a subtle tartar sauce.  Not mentioned in the menu description but also inside were pickled radishes and green beans.  This sandwich was heavenly. 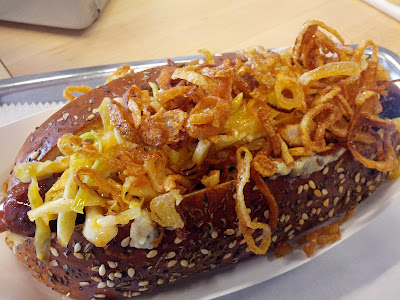 The smoked lamb sausage was basically the perfect hot dog.  Served on a zatar roll with sesame and cumin, there was a tangy slaw, roasted eggplant, and crispy fried onions.  The crispy onions were also not mentioned in the menu description, but this is a case where I was happy with the surprise.

Perhaps I am under the spell of Mile End.  Perhaps I am intoxicated by the idea of a Jewish deli, which Mile End Sandwich stretches into something new.  Perhaps it's just because I'm regrettably Jewish.  For whatever the reason, I highly, highly enjoy this establishment.