I like burgers, because, in many ways, it's impossible not to.  Yet at the same time I sometimes think that a burger is a funny thing to fuss over.  Why so many "best burgers in New York" lists?  Why do so many people seem to have an opinion on the matter?  Perhaps because it is something that indicates "hey, I'm a fun and down-to-earth person, please like me."

This past weekend I went to the Brindle Room, a pleasing little restaurant in the East Village.  I was told by an anonymous personage that said Brindle Room has one of the best burgers she's ever had in the City. An investigation was warranted.

First: the fries.  They were enjoyable, with a nice, browned skin and a fluffy interior.  There was a good amount of salt.

Second: the burger, a rounded affair with white cheddar and caramelized onions. It was enjoyable, with a noticeably tasty outer crust, which is achieved through the use of a cast iron skillet (for proof, see here). I do believe the meat was ever so slightly dry - not in a serious way, but in a discernible way.  One of the best burgers I've had?  Maybe, maybe top 10, although I must say I perhaps enjoyed the fast food style burger at Pork Slope just as much.  But really, apples and oranges, in a way.

For dessert, we enjoyed a trio of donuts.  Writing about donuts doesn't interest me, so I will just say they were good and leave it at that. 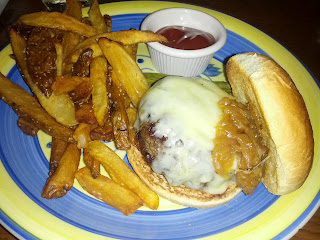