There was a time in New York when you would be laughed at by food snobs for mentioning chicken parmesan sandwiches and serious Italian food in the same sentence.  Serious Italian food had nothing to do with various meats and vegetables baked with tomato sauce and cheese.  Then came Parm. What this establishment has done is to take "red sauce" Italian-American food seriously.

Perhaps I should be a bit more clear, though: I imagine there are plenty of places, probably in Brooklyn and Staten Island, where they take it quite seriously.  But Parm is run by two gentleman with fancy training under well-regarded chefs, and the place is well-designed and kitschy in a cute, fun and inviting way.  It basically looks like a 50s era luncheonette, which seems to be an appropriation from another genre, yet works with the Italian-American menu. In other words, Parm isn't the only place in New York to take this kind of food seriously, it's just the only high-profile one in Manhattan that does.

So yes, the chicken parm on a hero is $12.  The sauce is top-notch, and the basil adds freshness.  The chicken is expertly fried.  The hero holds all of the components and absorbs them, creating a package of delight.  Indeed a fine sandwich, although a tad pricey.  But really, what can one expect at such an establishment?

I had a slice of ice cream cake for dessert, which was also $12.  At such a price, you almost have to try it to find out if it merits such a steep cost.  I had the special version, which had layers of graham cracker, chocolate and marshmallow ice creams.  It looked like a work of art: the Flatiron building turned into cake.  It tasted enjoyable, and rested on a bed of crushed graham crackers.  This may be the first time I've said this, but there was actually a little too much ice cream - I would have enjoyed a slightly higher ratio of the chocolate layers and little more of the delicious whipped icing.

Parm is no doubt a fun place with tasty food, and it pays homage to the idea of Italian-American food. There are no playful changes or adaptations, as in the Chinese food at Mission Chinese - it is played completely straight.  Pete Welles of the Times put it this way:  "it is completely faithful to your memories while being much, much better than you remembered."  I concur that it's faithful to one's memories (or ideas from the Goodfellas or the Sopranos) of this type of food, and it's probably better, although "much, much" better might be overstating the case. 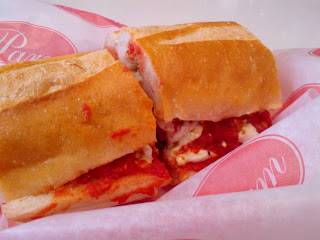 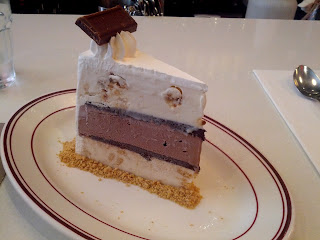 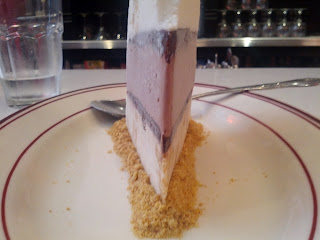