A Week of Meats


People often stop me in the street for a variety of reasons.  Sometimes it's to comment on how wonderful I look in-person, or how the chronicles of my little adventures have helped sustain them through some difficult time, or sometimes to just say a simple "I wish I could be more like you."  However, as of late, people have stopped me to say the following: "aren't you getting sick of roasted meats?"  The answer is "yes."

Roasted Oriental meats are always at least pretty good, sometimes quite good, and lord knows the world would be a far less ideal place if they were to vanish.  But frankly, after eating so many meats lately, I wouldn't care if pigs took a sojourn from my life for a while.

Anyway, I am behind on my tales of roasted meats.  Today, which happens to be a rainy Saturday, I will tell you of my experience eating meats on Wednesday, July 25, 2012.

I ate meats at Big Hing Wong.  The roast pork was reasonably enjoyable.  The whole roast pig, on the other hand, was rather dry, which must be a difficult feat to accomplish considering that whole roast pig is one of the fattiest cuts of meat that one could hope for.   All in all, fine but forgettable meats.

The one thing that was memorable was the cabbage, and not for a good reason.  It's a well known fact that Chinese meat houses will usually supply some greens to go along with roasted meats.  These greens are usually minimally seasoned or dressed, but generally still maintain at least a snippet of taste.  The cabbage at Big Hing Wong, however, was absurdly bland, almost the incarnation of water.  The best way to describe it would be to say that the steamed cabbage had negative taste, for that's how tasteless it was.

Anyway, I hope you've enjoyed reading this installment of a Week of Meats more than I've enjoyed writing it. 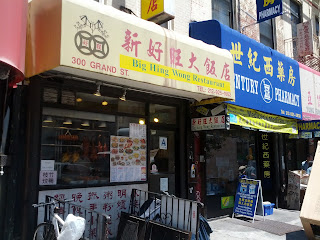 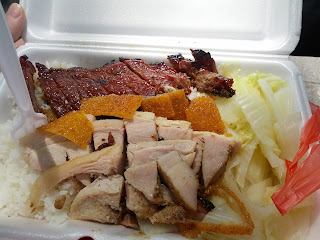