A Week of Meats


To give some background, I had first noticed Wah Fung while on a journey to New Kim Tuong, which I maintain serves some of the finest meats this side of the Mississippi. While I strolled towards Tuong I couldn't help notice a huge line spanning out the door at Wah Fung. I saw the meats hanging from the window and knew I had to go. I had previously learned my lesson that Wah Fung No. 1 Fast Food was closed on Monday. This time I approached on a Tuesday to find it open. The tables had turned!

There is a slender space inside where customers can stand and order their meats. Different from any other roasted meat house I've yet been to, they store many of their meats in basins filled with oily sauces. When you order they take the meat out of the saucy tubs and chop it up. And trust me, there is plenty of chopping, for they give you an inordinate amount of food. The price for your roasted meats, some cabbage and a heaping portion of rice is an absurd $3.

The roast pork is above average, and relatively moist thanks in no small measure to the sweet and savory glaze in which it bathes. The whole pig was on the too fatty side. Still, this is a respectable roasted meats house if ever there was one. The man who chopped the meats knew what he was doing and wore what seemed to be some kind of Mortal Kombat outfit. Come here!

Afterwards I walked two stores down to C&L Dumpling House for some ban mien, or egg noodles in a peanut butter sauce. They were $2 for a sizable mound, are rich and satisfying enough, and benefit from a garnish of scallions. One should douse the noodles with the piquant chili pepper vinaigrette that is available.

For those who claim that I cheated by having noodles in addition to roasted meats, meet me at high noon tomorrow and I will be waiting for you. 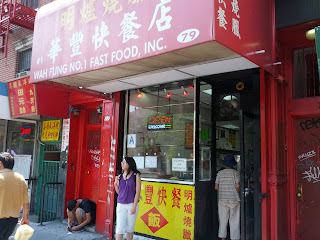 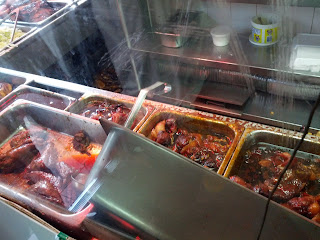 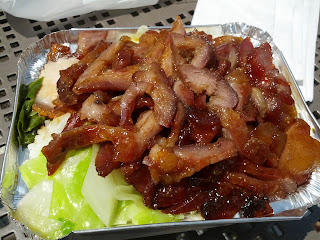 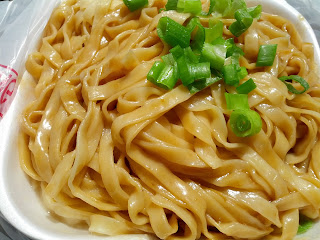