I pride myself on my ability to know good pizza when I see and eat it.  Sometimes I will eat pizza in the company of another, and this said another will go on and on about how great the pizza is.  I will roll my eyes and think to myself, this person is absurd, as this slice has gloppy, soybean flavored cheese, and a subpar sauce made with a mixture of tomatoes and fava beans.  Conversely, sometimes I will eat pizza in the company of a different another, and said another will say how mediocre the pizza is, while I sit comfortably with the knowledge that it’s truly a wonderful pizza.

The other day I presented myself at a pizza party, and the pizza was pretty decent.  Noteworthy it was not, yet not bad pizza.  “This is pretty good,” I remarked.  A lady, who will remain unnamed, rolled her eyes at me (how dare she), and said she was not that pleased.  She then proceeded to say her favorite pizza came from a place known as Delizia 92 on 2nd Avenue and 92nd Street.  I must say, I admired her gall, and as even I recognized the pizza before us was only pretty good and by no means excellent, I wondered if this lady perhaps knew what she was talking about.

They say taste is subjective, and there is no way to prove that a certain pizza is objectively good.  I simply beg to differ on the lines that my pedigreed taste is of the highest order, and what I like is simply what is truly good.  Of course, there are others with likewise agreeable taste. The question: how can you know if someone else has it?  I imagine it’s much like being a mutant in the world of X-Men, awkwardly making your way, looking for signs that others are imbued with special powers, too.  Was the Delizia’s lady a mutant?

I arrived at Delizia’s to find a rather charming place that had a sit-down restaurant and a to-go slice section. It’s possible that freshly made pies are better, but my slice was reheated, taken from a pie that may have been sitting around for hours or weeks, it’s difficult to say.  The crust was thin and nicely foldable while retaining a bit of crispness, but the cheese was an abomination.  It was of the kind that has a grayish hue.  After taking a few bites, I picked it up and it simply tore itself almost in half from the simple act of providing a gentle lift. And hence, Delizia’s was a disappointment. 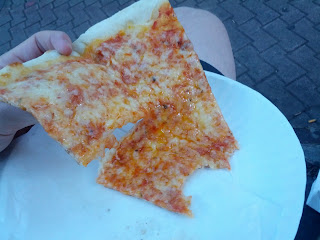 On a sidenote, I recently went to Roberta’s, the hipster haven in Bushwick.  I’ve been several times, and this time I ordered a pizza with red onions and soppressata, and it was quite nice, with a tender, charred-in-spots crust.  Onions on pizza are fabulous, adding a wholesome, earthy element which perfectly complements (and adds flavor) to the cheese and sauce. The soppressata added a salty smokiness.   And hence, Roberta’s was not a disappointment. 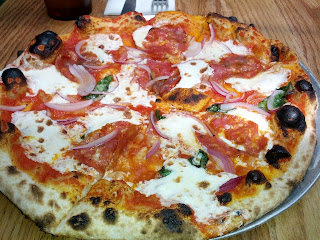