The sun was in the sky and a slight wind from the north whispered by, and so I rode. It was an epic ride, heading out from my Upper West Side bungalow, embarking south along with the West Side trail, crossing the Brooklyn Bridge, looping around Prospect Park, winding along the Williamsburg waterfront, and then crossing back into my beloved Manhattan via the overwater chunnel.

Along the way, two places were invaded: Bklyn Larder and Pok Pok Wing. 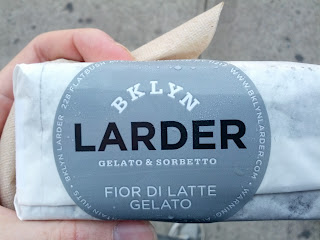 I had decided upon Bklyn Larder after reading a list of the best ice cream in New York by the new Village Voice critic, Tejal Rao. I've enjoyed her writing so far, but I must say, I was underwhelmed by the sandwich at Larder, which is modeled after the old school versions from your youth, a rectangular commodity with two chocolate biscuits and a filling of vanilla ice cream.  Larder's version features a rich (too rich?) and dense set of biscuits, and the gelato was fine enough.  A cute idea, yes.  Cool packaging, yes.  But is this really one of New York's best ice creams?

The second assault was laid upon Pok Pok Wing, the outpost of the West Coast-based Pok Pok empire. The place itself is cool, with colorful prints, kitschy blends evoking the  Partridge Family, Andy Warhol's Elvis with a six-shooter, etc. (Tears of the Black Tiger is brought to mind).  There is a world captured by Thailand pop-culture which is colorful, vibrant, weird, cute and eternal.

Oh yes, the food.  I ordered the spicy version of the wings, and although they weren't particularly spicy, they were flavorful as could be, tasting of garlic, soy and fish sauces.  The papaya salad was fresh and no better than versions I've had at other good New York Thai restaurants.  The sticky rice came in a bag and was indeed sticky. There was a chunk of cabbage that was unnecessarily huge. 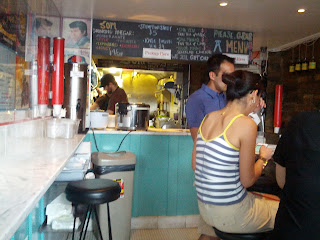 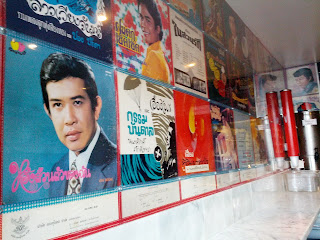 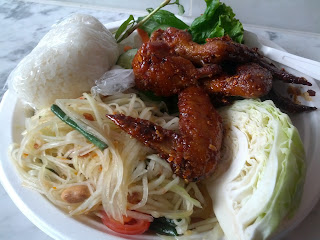 A nice experience and good food, if a little pricey, but I'll be back, with my six shooter, dressed like Davey Jones and riding off into the sunset, etc.