Good day.  There are two places I would like to discuss with you.  Please, sit down and pour yourself your favorite brandy or ginger ale, and relax.

Luzzo's. I've been to Luzzo's several times over the past 7 or 8 years.  I've always found it to be an enjoyably solid coal oven pizzeria.  On April the 18th I meant to try Via Tribunali, the new branch of the Seattle-based pizzeria.  For reasons I shall not go into (very much related to national security), the plan was scratched and Motorino became the target.  However, the wait at Motorino was too long, so, somewhat disappointingly, we ended up at Luzzo's.  In saying "somewhat disappointingly," I do not mean to disparage Luzzo's, because, as mentioned, it does serve pretty good pizza, yet I wouldn't place it in the upper echelons (Motorino I would).  This night was different, though, in that we ordered a pizza very much like a margherita, only there was also roasted garlic.  Further, and I very much emphasize this point, we asked for chile flakes and were given not only chile flakes, but also a chili oil.  Drizzled on the pizza, the hot oil catapulted the flavor into quite excellent territory.  The evening, thus, did not end in pizza disaster, and, in fact, a nice surprise was borne.

Via Tribunali.  Finally went last night, May 27, as national security allowed a brief window of opportunity.  I usually don't comment or care about the service, but I have to say, it was lacking.  We waited an inordinate amount of time, and although the waiter showed glimmers of a smile towards the end of the evening, for most of the occasion he rattled off a most convincing "I don't care" attitude.  The only time he seemed to show any emotion was when I inquired on the ginger ale situation, and upon hearing that ginger ale was indeed available, I ordered one.  His emotion was one of annoyance or mild disgust.  Also, the place was tiny, and as I was right next to the pizza oven, various servers rammed into me countless times without so much as an "I'm sorry" or "please forgive me, I can't stop loving you." Anyway, the pizza.  The one I ordered, the "diavola," was good.  It has salame picante, which very much seemed like the pepperonis of yore, the ones which morph into concave grease-holding vessels when cooked.  It was a worthwhile pizza, not necessarily transcendent, but deserves further investigation. 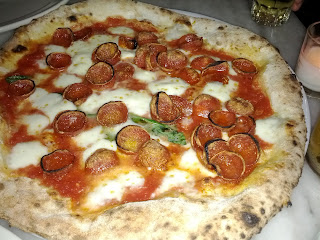 Now, I must get back to the work of saving our country.  Farewell, and god save queen.