Saturday, May 26: a day which will live in infamy.  Abandoned and left for dead by a "friend," I somehow managed to crawl out of my cave, and, by eating insects and wiggling my toes, slowly regained strength.  In my weakened state, mounting Traveler felt much like ascending Everest, yet I prevailed and headed south to Sheng Weng in Chinatown for food. 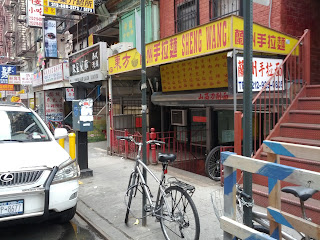 Hand-pulled noodles in soup have received much attention the past several years from the New York food press, and many people seem so enthusiastic about what, for me, has always been rather bland bowls of broth filled with noodles.

I thought I learned my lesson that the "dried" versions are superior to the soup versions. (the former are dry compared to a soup, but are still moist enough, much like lo mein).  Perhaps because I thought a bowl of soup would brighten my demoralized spirit, perhaps out of a desire to eat what the other Chinese clientele were eating, I ordered the soup version. The bowl of soup and noodles arrived, and it was filled with huge pieces of tendon, which looked like sea monsters; other grisly and gelatinous pieces of meat floated in the broth.  I tried eating one of the tendons, thinking this is what real Chinese people do.  It tasted of canvas sneakers, and was impossible to chew.  The broth was fine but not particularly memorable.  The noodles were fine but not particularly memorable.

People can write about hand-pulled noodles in soup all they want, but I've yet to have a version that is really very good.  The dried, "lo mein" versions appeal more to me and allow for greater enjoyment of the noodles, as they are not drowned in watery broth.

As I left Sheng Weng, I noticed a bowl of soup that had been left behind by a Chinese patron.  It was completely empty, save for the tendon sea monsters. I felt relieved that a real Chinese person didn't eat the tendon, either.  I would live to fight another day.  Traveler and I headed north.