Years ago I ventured north by Amtrak to Montreal.  As the trees and the *Adirondack mountains whizzed past, and as an elaborate murder was being investigated by a funny little Belgium man, I had no idea what awaited me.  What awaited me in Montreal was a vibrant Jewish deli culture.  "Smoked meat," they call their meats that have been smoked, and they rival the pastrami of New York.

A few years ago, a man from Montreal opened up a deli in Brooklyn, calling it Mile End. I'm embarrassed to say I have not gotten around to trying it.  Yet just a couple of weeks ago, an outpost opened up in Manhattan, focusing on sandwiches (the original location has a much more expansive menu).  It was high time to get down there and have meat which has been smoked and placed between bread studded with rye.

The entire menu looks rich, pungent, flavorful, fatty, excellent.  For my initiation, I chose the basic smoked meat sandwich, a concoction of cured and smoked brisket with mustard on rye.

It is not a huge sandwich.  Perhaps 4 inches across, although the sandwich partially makes up in girth what it lacks in length. The thickness of the brisket and the extreme proportions make one ponder if the sandwich had been placed in front of a 'Honey I Shrunk the Kids' machine.  Yet analyzing the size, however large or small, detracts from what's important, that being the absolute deliciousness of the endeavor. It is almost perfectly satisfying.

The revival of the Jewish deli is much appreciated.  The next day I had a reuben sandwich at Manchester Diner in Morningside Heights.  Manchester has a nice, diner-ish atmosphere, and their breakfast is decent enough.  The reuben, however, was sad, with corned beef that tasted more like corn than beef. The smoked meat at Mile End, on the other hand, is luscious and philosophical. 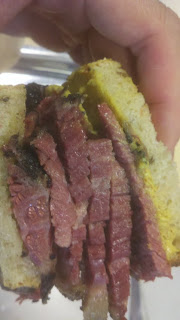 
*the mountains i passed were perhaps not the adirondacks, but i prefer to name them as such for dramatic purposes
Newer Post Older Post Home