This was a weekend of sandwiches, and there are worse things in the world than such weekends.

Sandwich 1 was from 7 - No. 7 Sub, that is, an eccentric sandwich shop with a location in Greenpoint, Brooklyn and another in Manhattan connected with the Ace Hotel.  I visited the latter. 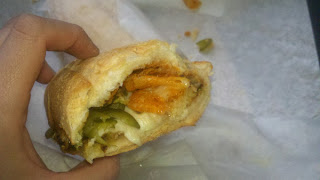 I had the Zucchini Parm and enjoyed it; however, it was not a zucchini parm.  Allow me to explain.

First, the zucchini wasn't really zucchini.  If this wasn't enough to throw me off balance, there was neither tomato sauce nor mozzarella cheese.  There was fontina cheese, jalapenos and mesquite potato chips.  I don't mind being lied to, however, when the result is tasty. Note to self:  put jalapenos on more sandwiches.

Sandwich 2 was from Il Buco Alimentari & Vineria, a place that is quite popular these days, probably in no small part to Pete Wells' ecstatic review.  Given his review, I was a bit concerned the place would not live up to its hype.  Granted, I was just going for a sandwich -- it's both a market with a sandwich counter and a sit down restaurant -- but still, my natural tendency to discredit praise was in full-effect.  This was even more pronounced than normal because Il Buco is trendy and hip, and I also have a natural aversion to trendiness and hipness.

I hopped on my bike and rode down to Great Jones Street, which is probably one of the best sounding roads in all of New York.  I wanted to try the porchetta sandwich.  I rode like the wind, but apparently I didn't ride fast enough, for some horrible lady ordered the last porchetta sandwich just as I entered the premises. 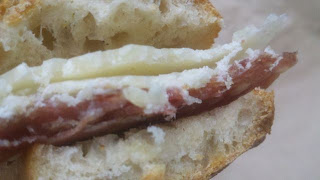 Instead, I ordered a salume sandwich which was served on a tough yet chewy loaf with either pecorino or parmesan cheese and a bit of olive oil and salt and pepper.  This sandwich was simply scrumptious.  The flavorful salume with its ostentatious peppercorns was rich and appropriately fatty and perfectly suited for a sharp and salty pecorino (or was it parmesan?).  A fine sandwich.