Frank Pepe's, the revered New Haven pizzeria, opened up a branch in Yonkers recently and I decided an investigation was in order. I took the train up to Tuckahoe, and a friend, who lives in Yonkers, picked me up and we went.

There was a long line stretching out the door when we arrived, but for the 3 of us we only waited about 15 minutes, maybe even less, to be seated. However, once we were seated, we probably waited another 30 minutes at least to get our pizza once we ordered. We did notice that one of the pizzas fell out of the oven though, and it may have been one of ours.

I ordered my own pizza, a medium, but let me tell you, it was more the size of a large. I ate the entire pie myself (minus some of the crust) and felt extremely sick afterward.

The verdict: I thought it was quite good, and probably as good as the New Haven location, although since I haven't been to the original in about 4 years I cannot say for sure. Someone in line mentioned his disappointment with the cheese that Frank Pepe's uses. My two friends also made mention of the cheese. I happen to like the cheese, but I do appreciate that there is a certain amount of blandness to the cheese, or perhaps it's just the pie as a whole. Perhaps a little sea salt would be nice? The menu claims all of their pies get a dusting of Romano, but I'm not sure you really can taste the salty tang of a Romano. Still, I did think the Frank Pepe's pie was very enjoyable.

Due to a camera problem, all of my pictures were destroyed, although I was able to take a couple of pictures with my friend's phone. 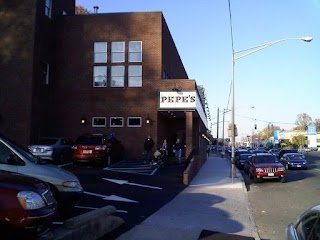 Frank Pepe's is located on a rather commercial stretch of Central Avenue in Yonkers, next to quite a few car dealerships 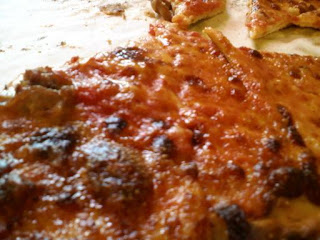 A closeup of my pie. I got half plain and half with onions and sausage.