The End of Detective Sumners (Rated R - no children!) 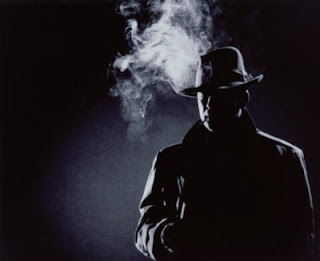 "Goodbye, Detective."
It was nearing midnight and Detective Sumners was still at headquarters, pumping out reports, or "bullshit" as he referred to them.

"22. Female. Shot in the back of the head. No witnesses. Bag of peanuts found near body. No leads. No known friends, family or associates."

Jesus. What a life. Did it even matter that she lived?

"84. Mugged and shot to death in Times Square. Suspect apprehended. Many friends, family and associates. Well loved and respected. Will be missed by many."

Jesus. What a life. Did it even matter that he lived?

He took a deep drag from his cigarette and the perspiration dripped down his neck onto his shirt collar. He finished his reports, tidied up his desk and left headquarters, which was dark and quiet. He stepped out onto the street and there was a cool wind. It had been raining earlier and the streets were shiny.

He made his way to the diner for eggs and coffee.

"There he is! That no good excuse of a man who put me behind bars."

The man followed Detective Sumners, who was on his way to the diner for eggs and coffee. Detective Sumners walked at his usual leisurely pace, smoking a cigarette, stopping to look at things that interested him, like an old chair someone had put out for garbage.

The man caught up to the Detective, pointed a gun at his head and pulled back the hammer.

"Do you remember me?"

Sumners took a drag from his cigarette and said no.

"Could be worse," Sumners said.

The man laughed. "You're right, much worse. Goodbye, Detective."

Sumners took one last drag and the man fired the pistol into his face and Sumners fell.