A Jedi's Strength Flows From the Force

Who can forget the famous Degobah Cave scene from Empire Strikes Back? The one where Luke feels cold and Yoda says,"that place is strong with the dark side of the Force." Luke proceeds to enter the cave and he starts to collect his weapons and Yoda says, "Your weapons, you won't need them." But stubborn Luke brings them anyway.

Well, Luke goes in and he finds Vader and they duel and yadda yadda yadda. However, my question is, what if Luke had listened to Yoda and had NOT brought his lightsaber? What would have happened? Would Vader have been easily able to kill him, Luke being without a weapon? I don't think so. I think there are two possibilities.

The first possibility is that an 'Easter Vader' would accompany Luke to Target, where they would do some back to school shopping... 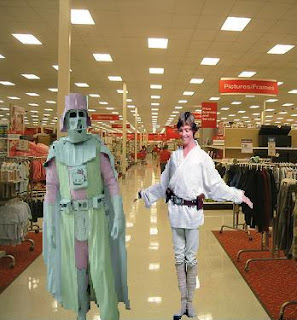 -How do I look, Vader?
-You remind me of your grandmother.
-What?
-Oh, nothing. Nevermind. Um, look at those spatulas!


The second possibility would be that Luke and Vader ride Mopeds around town... 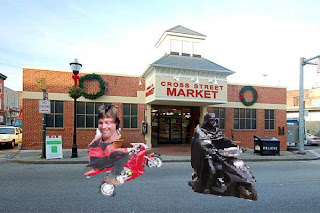 -You have learned much, young one!
- Weeeeeee!!!!
-Nevermind, I take back what I just said.


Anyway, as you can see, it is rather unfortunate that Luke brought his weapon. He and Vader could have had so much fun. I wish I could rewind things - strong am I in the Force, but not that strong.
Newer Post Older Post Home