My Feelings on Supermarkets

I like supermarkets. In New York, supermarkets are very often not so nice. There are certainly some exceptions, such as Whole Foods, but I'm actually embarrassed to say I like Whole Foods because it instantly classifies me as a Yuppie. Unfortunately, my keyboard doesn't have a 'backspace' or 'delete' button so you will just have to know that I am Yuppie.

Anyway, people often say that urban areas are much more alive, much more diverse, much more interesting, etc. than suburbs. In actuality, these things that seem to be missing in the suburbs are actually just concentrated in mega grocery stores. So really, there's no real net difference in excitement, sense data, choices, etc. between cities and suburbs -- it's just distributed in different ways.

Here is a scene from Punch Drunk Love, the PT Anderson movie, showcasing the visual beauty of the modern supermarket (this scene is itself a reference to a grocery store scene in the Robert Altman film The Long Goodbye). 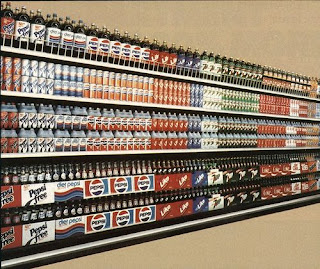 Here is the soda section from an American grocery store in 1984. Pretty visually appealing, I would say. 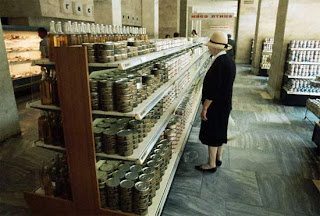 Above is a picture from a USSR grocery store (thanks to Joseph and his EnglishRussia advice). Pretty boring, right? And, as some commenters on the EnglishRussia website say, there really weren't grocery stores in the Soviet Republic -- a few 'showcase' stores were strategically placed in large urban centers, which were more 'visible' by international guests.

Anyway, I am going to be thinking more about grocery stores and discussing their significance in post-Cold War, post-modern life. I will get back to you with my results.
Newer Post Older Post Home