Last week, a very wonderful co-worker asked me if I would like to go to an ice cream shoppe. Without even thinking I said "yes." Agreeing to get ice cream is an instinctual response for me. To add to my delight, though, this was no ordinary ice cream place - it was an ice cream store being run by a 1st grade class at a public school on the Upper West Side. 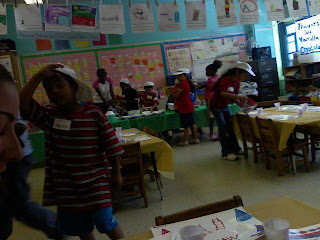 The ice cream restaurant
My co-worker's sister, a teacher, was having her students run an ice cream store with sit-down service. Upon arrival, a very kind host brought us to our table, and almost immediately our glasses were filled with water. Then, a waiter arrived to take our order. I must admit, the service was a bit rushed.

50 cents was the base cost of the ice cream, and you could have vanilla or chocolate. It was then 10 cents per topping, with a maximum of 2 toppings (why they would create a maximum is beyond me).

Anyway, one of the available toppings was sprinkles, and I wanted to inquire if they were chocolate or rainbow sprinkles. "Rainbow" my courteous yet unfocused server responded. "Well, in that case I will have Oreos and chocolate chips as my toppings," I said. I must admit, there was probably a tinge of disgust in my voice, as I was still a little peeved that you could only get two toppings.

Soon thereafter my ice cream was brought to the table. I was told they made a mistake and therefore I would get two bowls of ice cream. But not even one of the bowls was the correct order! The one that they thought was correct had Oreos, chocolate chips AND rainbow sprinkles. But I never said I wanted rainbow sprinkles, I had only asked what kind of sprinkles they had. Also, there were three toppings - they broke their own rule! 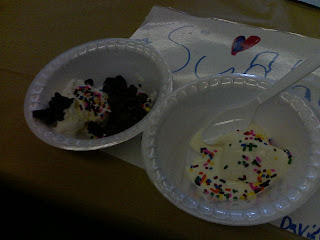 Uh, what the heck happened?
I will admit, the ice cream was excellent, but the service, although warm and friendly, was incompetent at best. But still, in the end, the ice cream's the thing, so I would give this ice cream store a B+.
Newer Post Older Post Home