Why Does Turkey Get All The Good Chocolate?

Nestle is a brand you have perhaps heard of. I believe they are responsible for the yellow bags of chocolate chips that are commonly used for baking. Anyway, the other day I was standing in line at the market and I saw a red, square-shaped package of Nestle milk chocolate. But something was different about this chocolate. This chocolate had been intended for non-Americans -- Turks, in fact.

I bought the chocolate and ate it and it was very good. And then I pondered why non-American, mass produced chocolate is so much better than the mass-produced stuff we have here. It's very depressing, but at least it's comforting that stores in the U.S. (at least in New York, and I imagine other large cities) sell chocolate marketed and sold in Europe and beyond. 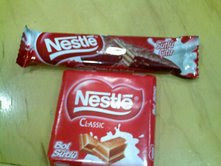 The milk chocolate square on the bottom; on the top is a Kit-Kat type product; also, I tried to mimic the shape of the letter 'T,' for Turkey
Newer Post Older Post Home