From the Editing Room Floor...

Recently, I discussed my love of the title sequences from the 'Man with no name' trilogy, and more recently I linked to a website devoted to title sequences. One such title sequence is for 'Catch Me if You Can,' Steven Spielberg's crime caper staring Leonardo DiCaprio and Tom Hanks.

I happen to really enjoy this film, and it also has a really cool title sequence. There are various images of urban settings and people walking around.

Here are some images from the title sequence of Catch Me if You Can... 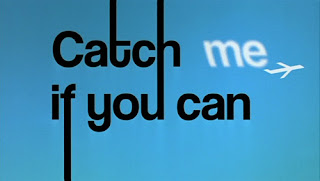 Anyway, It is a well-known fact that there is footage from movies that never makes it into the final cut. This also pertains to opening title sequences. FAPPAF has recovered a cut scene from the Catch Me if You Can title sequence that never made it into the final cut. What is extremely notable and relevant is that clearly this image was cut because of the second man's pants. 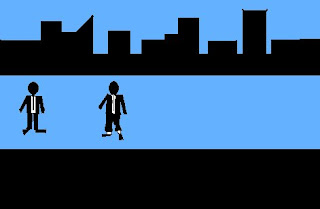 As you can see, the man on the right is wearing a pair of pants that are too short and that are too baggy. I think Spielberg should be commended for not allowing this image into the title sequence. For all his mistakes -- the Lost World, Hook, AI, War of the Worlds, the ending of Minority Report, etc. -- it's nice to know that Spielberg has not completely lost touch.
Newer Post Older Post Home