Went to Artichoke on Friday, the new pizza place on 14th Street. There is no seating inside - simply a window from which to order and hopefully receive pizza. There was quite a line but it was all right because it was a very pretty evening. 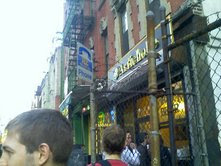 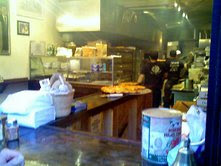 The window counter area, peeping inside where they make the pizza

So how was it? Good, I thought. I had a slice of Sicilian (square), Neapolitan (circle), and a slice of spinach and artichoke (which is on a round pie). I thought the Sicilian was very good, a nice crust, a flavorful sauce, etc. The Neapolitan was also good. The spinach and artichoke was a bit rich - a friend remarked it was like French onion soup poured onto a pizza crust. It was kind of difficult to eat a whole slice of it.

Anyway, if you are on 14th Street and would like a piece of pizza, I would go to Artichoke and get a Sicilian. 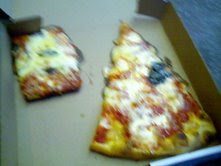 Sicilian and Neapolitan without toppings 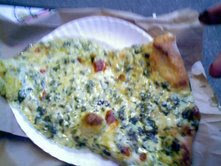 The spinach and artichoke slice, swimming in a sea of butter and god knows what else
Newer Post Older Post Home